I want to very briefly look at how good PL teams are converting their shots on target into goals and preventing the opposition from doing likewise, and what happens when we add both of those metrics together in what we call PDO.

For a more detailed explanation of what Save%, Scoring% and PDO actually are, please visit here.

Thanks to the work of James Grayson we know that Save%, PDO and to a certain extent that, given time,  scoring percentages regress pretty heavily back toward the mean. Do go and sift around his site for all kinds of posts on the three metrics I am about to look at.

High numbers are good numbers, although they are not necessarily sustainable. 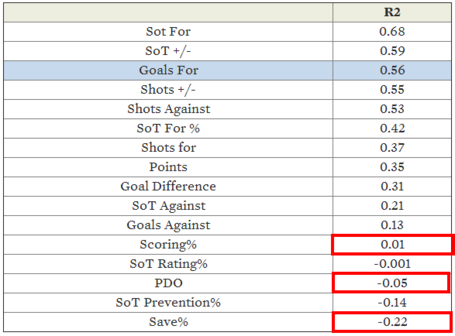 Oops, converting your chances or preventing the opposition from doing so isn't particularly repeatable in this small sample. 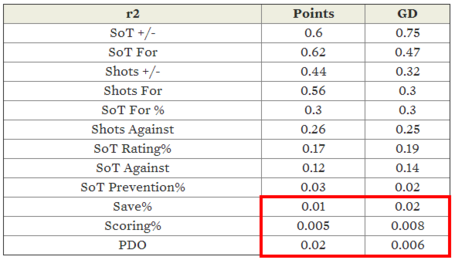 Not very predictive of future goal difference or points won. I must reiterate that using 8 game buckets is not ideal and is quite frankly a tiny sample of games to be using.

So, why do we use these stats? Well, because they are fun and the are descriptive of how teams are converting in the here and now. Also, if a team has strong underlying fundamentals but happen to be posting poor save% or PDO numbers then it might be a pretty good bet that those numbers will regress toward the mean and that club will see an increase in goals for/against and points won. General points, but you get what I am trying to say.

In fact, I think EricT explained PDO in very clear terms, and i am paraphrasing here: "PDO basically tells us if a team is over or under performing its Shots 9TSR) +/-.

Things we know so far: Save%, Scoring% and PDO regress back toward the mean, they aren't very repeatable (lots of variance) and they are not in any way shape or form predictive of future results.

Now I am going to visualize that regression through the first 19 games of the 13/14 season.

Pretty neat visualization of Save% regression. The outliers regress toward the mean, the spread narrows. only Arsenal remain somewhat away from the pack.

Again, we see the spread narrowing as the amount of games played increases. Man City are an outlier as are Palace and Tottenham. Spread of scoring% isn't quite as narrow as the spread for Save%.

The spread of Teams' PDO is not that wide now, and it wasn't that wide after 5 games of the season. There is still plenty of regression in PDO but that regression doesn't look to be as visually evident.

Narrow spread for save%, larger spread for scoring%. I'll check back on this chart at the seasons end and we'll see which teams have regressed. Expect a tighter clustering around the cross hair