Various data sites track all kinds of weird and wonderful stats, one of those stats that I decided to track was Final Third Passes. Every game features an image like this: 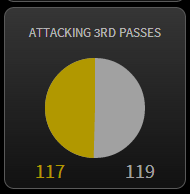 I assume that the totals featured in the image above are attempted passes rather than completed passes, but who knows. I counted the numbers in the images above for all 190 games of the season so far.

Taking the image above and the other 189 from the rest of this seasons game I was able to create a final Third Pass +/- and Final third Possession%.

There's some pretty cool information in that sortable table. Information that tells us Man City and Arsenal both post +/- numbers better than Liverpool and Man United's +/- numbers combined.

Obviously Final Third Passes are susceptible to massive score effects and time decay and the like. But once again, as I keep stating, good teams will post good numbers given a large enough sample.

The relationship between the two buckets is really strong at 0.88. Sunderland are a huge outlier,  they posted a ~50% number in weeks 1-10 and a ~42% numbers in weeks 11-19. Score effects, some drop off in their play are likely reasons.

We know that final third pass ratio is repeatable but we needed to know if could predict anything of worth. The answer is yeeaaa...maybe:

An r2 of 0.389 isn't terrible, in fact it's good. The problem is that we have far better predictors of future performance than final third pass ratio.

In case anybody is interested this is how Final Third Pass Ratio correlates to Goal Difference on a week to week basis:

A lot of maths here but the things to take away from this article are simple: