Share All sharing options for: Bayern 2 - 3 City: The Tactics

A night to remember, that. While much has been made about Pellegrini's  admission that he didn't know City needed just one more goal to top the group, the victory itself should remain the primary talking point. And what a victory it was.

With Pellegrini opting for City’s "B-side" – I put it quotes because we fielded our best player (Silva), our best goalkeeper, our current best left-back, and Fernandinho, a player who has progressively grown into this side and now obviously warrants his starting XI position – and Pep fielding a strong side, many predicted a City shellacking. And while Bayern’s first two goals may have shown their intent, City’s response proved far too much.

Like he did in their first encounter, Pellegrini opted for a 4-2-3-1, giving Dzeko a rare chance to lead the line alone. In the midfield, the decision offered City at least a numerical chance against Bayern's 4-5-1, a formation that often resembles a 4-3-3 and a 3-6-1. 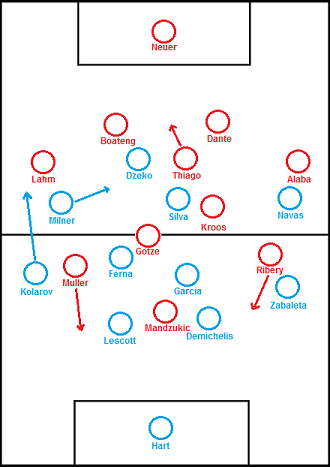 As City grew into the game, Silva began to find space in the Bayern midfield, specifically in the horizontal space between Kroos/Gotze and Thiago -- a player who, while wonderful in possession, is not a defensive midfielder in the "destroyer" mold -- allowing City's little wizard to spread the ball and play the useful one, twos that City have used so effectively this season. Beneath him, Fernandinho and Garcia were delightfu, both in pressing their midfield counterparts and distributing the ball.

Milner's performance has been rightfully lauded in much of the postmatch analysis, but I'm not certain that most of it even goes far enough. Indeed, it was Milner's who assisted Silva for City's opener, Milner who won the penalty for Captain Kolarov to convert, and Milner of course, who scored the winner. But even more than his offensive contribution, it was his sterling position and defensive responsibility that saw Lahm minimized to a mere bystander -- a key factor to this City comeback.

On the right side of City's defence, Zabaleta did something that hasn't been achieved by many in Europe this season: that is, keeping Ribery in check. Ironically it was in a substitute role that Zabaleta may have had the best performance in a City shirt (no small feat considering he was our best player last season). After Ribery chose to show his tricks with a series of cutbacks, the first of which left Zabaleta sliding for nothing, that ultimately resulted in Zabaleta blocking the cross, the Argentine made certain to win all future duels with tricky French winger.

City defended in a 4-4-2 with Silva joining Dzeko in the first line of the press (a press that worked better than the score initially indicated – more on this later). Javi Garcia and Fernandinho sat beneath them, responsible for minimizing the space that Gotze and Kroos can be so dangerous in. Outside of them, Milner and Navas defended the space above the fullbacks, often being forced to come inside on the occasions that Muller and Ribery drifted inside, forcing numerical overloads in the center.

Bayern’s midfield without Schweinsteiger and Martinez featured the trio of Thiago, Kroos, and Gotze, with Thiago taking the deepest point of the midfield triangle. In possession, Thiago’s defensive deficiencies are rarely exploited as he drops deep into the Bayern formation often playing between the two centre-backs, Dante and Boateng (in a very similar manner as Jack Cork did for Southampton). This dynamic can be seen below. 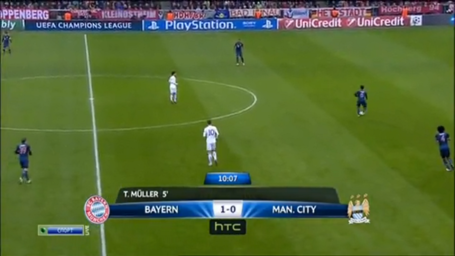 When Thiago drops between the centre-backs, it leaves a large amount of space deep in the midfield are as obvious horizontal lines in City’s defense begin to be seen. Bayern’s back line in the early stages of their buildup consists of Boateng, Thiago and Dante. Above them, Kroos and Gotze settle into whatever pockets of space can be found. In the early stages of this match, that space was between City’s two forward horizontal lines: the first consisting of Dzeko and Silva and the second consisting of Garcia and Fernandinho, as seen in the still below. 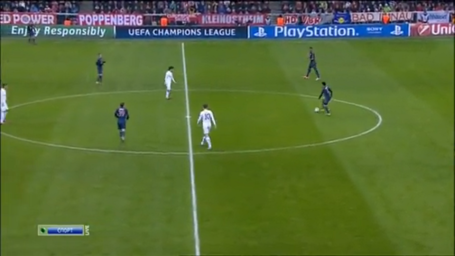 City were largely ridiculed for their poor start, with many suggesting a cricket-like score was in the making, but I would argue Bayern’s first goal displayed good City defending, opened up by a pass with a typically poor completion percentage, that Pep has largely tried to eliminate from Bayern’s play.

The buildup for Bayern’s first goal begins on City’s right just inside their half, with Bayern’s right  back, Alaba, on the ball. His first option – and obviously his preferred option – is to push the ball forward to Kroos who is often the deep lying catalyst for much of Bayern’s forward play. As Navas comes forward to press Alaba into making a quick decision, Javi Garcia is also moving forward to press Kroos, closing down that open space and making the Alaba --> Kroos option null. 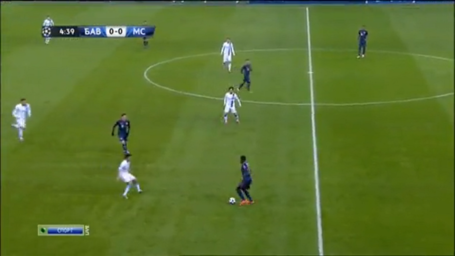 Thiago is also seen retreating into the aforementioned space between the centre-backs, but Silva’s forward position makes that pass far too risky to attempt, giving Alaba only two options: (1) a short back pass to Dante (2) a long back pass to Neuer. As you can see below, he opts for for the short pass to Dante who now has even fewer options than Alaba did. 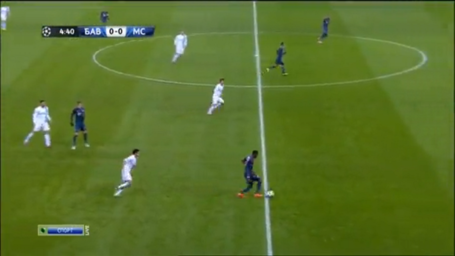 As Alaba turns and passes the ball to Dante, Silva continues to move up the pitch, completely negating Thiago’s position. Garcia is now even closer to Kroos than before and beneath them and off to the left, Fernandinho has man-marked Gotze inside the center circle. City’s back line, while occasionally too deep in the opening stages of this match, was actually positioned impressively high up the pitch, with the appropriately close pressure being applied to all of Bayern’s midfield and forward players: at the bottom right, Richards and Demicheles can be seen marking Ribery and Mandzukic respectively, Garcia is still responsible for Kroos, Fernandinho has Gotze properly contained in the center of the pitch, while on the far side of the field Milner and Kolarov are marking Lahm and Kolarov. 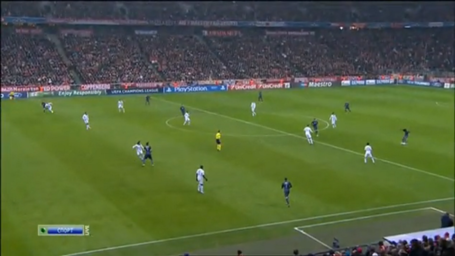 Just because Dante plays a perfect pass (on a decision that Pep was clearly unhappy about) to Mueller, who appeared to be offside, does not make City’s defence poor. In fact, I’d argue they positioned themselves properly into forcing Bayern to resort to the long ball – something they then defended rather poorly.

On the occasions that Neuer found himself with the ball as an outlet to maintain possession, City pressed high the pitch, all the way to Bayern’s 18 in fact, in an effort to again force the long ball and interrupt the timing and tempo as Bayern build from the back. That full pitch press saw three men lead the line, with Dzeko and Silva being joined either by Navas or Milner, while depending on how deep Gotze or Kroos dropped to provide another outlet, Fernandinho and Garcia would also push up the pitch. This can be seen in either of the stills below (the first with Navas as the third man and the second with Milner).

In either case, this high pressing line removes Neuer’s preferred first level of passing from his possibilities, as both centre-backs and the deepest midfielder are no longer viable candidates to receive a pass. The result? Neuer is forced into a longer pass with a lower chance of being converted.

Going forward, City found great success in a midfield triangle that saw Garcia sit deepest with Fernandinho above him and Silva above Fernandinho. This triangle routinely moved from side to side to interact with the fullbacks and wingers who moved forward with very specific purposes. On the left, Milner was responsible to move inside from the wing, drawing Lahm with him and exposing space for Kolarov to move into, pulling Muller deep into his own half. This can be seen clearly in the build up to City’s first goal. 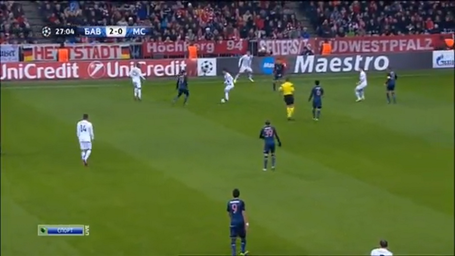 City’s forward play on the right worked quite differently, as Jesus Navas is obviously at his best when driving to the touchline and putting the opposing fullback on his heels. In this instance, Zabaleta moves inward on the underlap, forcing whichever opposing midfielder (in the case of the first goal, Kroos) is marking him to also be dragged inward. This can also be seen in City's first goal, right before Navas crosses into the box. 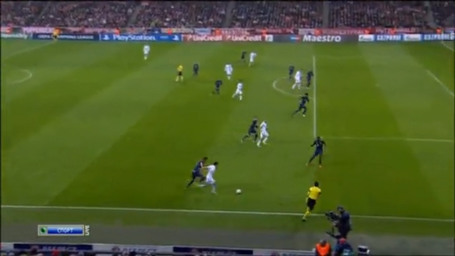 Of the many surprises in this match (and there were many), I think the biggest was how seemingly little City missed Yaya's midfield presence. Fernandinho, freed to move forward in a more box-to-box role due to Garcia's deeper defensive positioning, took up the role of midfield engine or whatever other cliche is assigned to Yaya. Garcia played perhaps his best game in a City shirt, often breaking up Bayern's tempo and rhythm while also pressing Kroos and closing the midfield space he thrives in. At the back, the fullbacks (at least after Richards' departure) were wonderful, while Lescott and Demichelis were solid. Hart too, while given little chance on either of Bayern's goals, made a couple of sharp saves that allowed City to ultimately take the lead. Up front, Dzeko played his best match of the season (sensing a trend?) while Silva was Silva.

And all this, away from sunny Manchester.