A tactical analysis of Sunderland's defensive masterclass that proved the Ki for their fourth successive home victory against Manchester's Citizens.

A shock result or an annual tradition? As City have now lost 1-nil away to Sunderland for the fourth consecutive season, perhaps a compromise is in order and it be called "City's Shocking Yet Annual Tradition" -- a bit of a Dickensian ring about it, that.

City arrived at the Stadium of Light in fine form, having scored 12 goals in their last three matches and seven in their last Premier League match home to Norwich. And thus, in "Typical City" fashion it's perfectly sensible that Sunderland managed their first Premier League clean sheet of the season (the other coming in their Capital One Cup tie against Peterborough) having conceded a league-worst 22 goals in the previous 10 matches.

And while some may point the blame at Pellegrini's selection (Pantilimon was quite poor on Bardsley's goal, while it took all of one minute for Navas to get the ball on Negredo's head), the match was quite simply a battle of defences, in which City's was laughably poor (giving up one goal on just two shots on target) and Sunderland's incredibly impressive.

Given the lack of possession (just 36.9%) Sunderland managed, it makes far more sense to view this game from what the home side managed without the ball than what they did with it. Defending in 4-5-1 with Fletcher playing high up the pitch to serve as the primary outlet, Sunderland defended City in a way few (if any teams) have attempted before.

When City had the ball (which they did for most of this match), Sunderland dropped deep with the Celustka, O'Shea, Brown and Bardsely routinely standing on the edge, or just inside, of the 18, while on the far flanks of the pitch Giaccherini and Johnson (playing on the left rather than in his typical inverted position on the right) dropped very nearly in line with the back four to track the fullback runs of Kolarov and Richards respectively.

This left the middle of the pitch to be defended by the inverted midfield trio of Ki (who, with all due respect to Wes Brown, was Sunderland's key man -- my god, that pun was rank), Colback and Larsson. And it was in this triangle, and it's movement, that Sunderland found its defensive catalyst. The diagram below outlines the shape of the Sunderland defence, with an added emphasis of the midfield trio. 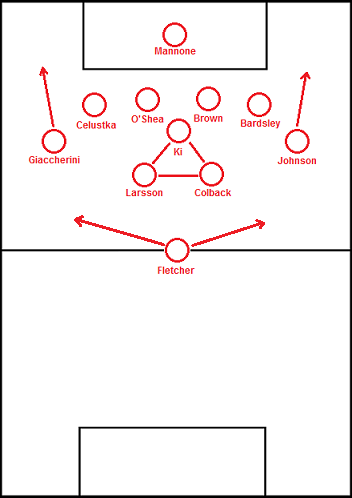 Fletcher's job, while rather simple in instruction, was crucial to Sunderland's success. Responsible for the high press, he often moved out wide to pressure Lescott and Demichelis as they played the ball out of City's defence. Rarely did Sunderland make a concentrated effort to push out of their own half as a team and so Fletcher worked in increasing isolation as the match wore on, working left to right and right to left both to press and to offer his deeper teammates the outlet.

The backward arrows from Giaccherini and Johnson show their commitment to helping the fullbacks on the outside overlap. But at certain times, when Celustka and Bardsley pressed up in the midfield, the wingers would drop, always maintaining Sunderland's four at the back. In similar fashion, on the occasions that Bardsley ventured forward with the ball or in support of teammates, it was Colback who fell back into the vacated space on Sunderland's left: this can be seen perfectly on Sunderland's goal, as Colback is inside his own half on the far left of the pitch, protecting that flank in case Bardsley is caught further up field.

Back to the defensive triangle: as Sunderland's centre-backs dropped deeper, Ki dropped at an equal or greater rate, at times falling so deep he joined the back four as an additional central defender. The result? O'Shea and Brown were never stretched, continually in control of Negredo and Aguero.

Consider Navas' first action in the second half. In possession of the ball and roughly 25 yards from the byline, with Richards providing the overlap, Navas will drive down the flank and put a cross into the center. In this instance, Bardsley will follow Richards inside, leaving Johnson to track Navas:

As Navas continues to the byline, the entire Sunderland defense has moved with him: Johnson has him marked directly, while Bardsley likewise, has Richards directly marked. Meanwhile, the triangle of Ki, Larsson, and Colback has also dropped deeper, with Ki responsible for a potential near-post run if Navas' cross is shallow, while Brown is man-marking Negredo in the middle, and O'Shea and Celustka are directly responsible for Aguero on the back post. Giaccherini has also dropped to the edge of the 18 although as neither Kolarov or Nasri have moved forward he is simply defending in space:

While the above screens showed Sunderland's reaction to City's offensive movements on the right, the screens below show their defensive reaction when play shifted to the left. Again we see the same triangle moving horizontally to the ball as Giaccherini (just as Johnson did with Richards) covers Kolarov's overlapping run:

The most impressive aspect to Sunderland's triangle was how uniformly it moved relative to the movement of the ball In the screen below, we see Aguero take the ball all the way to the Sunderland byline, affording us the chance to see Sunderland's shape when City pushed them all the way back to their own goal:

The midfield trio has dropped all the way into their own box, with Colback and Larsson roughtly fifteen yards from goal. As John O'Shea has moved out wide to pick up Aguero and Negredo is in the center of the goal marked by Wes Brown, we see a large amount of vacated space -- space because City have successfully pulled the Sunderland centre-backs apart. Crucially, Ki drops into the space, closing down any possible opening for City move into. Where is Aguero supposed to go with the ball? Brown has Negredo's near-post run marked, while Bardsley has the back-post run equally covered; Johnson has retreated all the way into his own box to pick up Navas' incoming movement; the top of the midfield triangle has Kolarov (marked by Larsson) and Yaya (by Colback) successfully covered.

While much will be made of yet another away defeat for City (yet again to a side beneath them in the table, no less), this game was far more about what Sunderland, led by Poyet's magnificent tactical display, did to win rather than what City did to lose. From the off, Sunderland made their intentions clear: to cede possession and defend in a tactically astute structure that covered the flanks and the center equally. And their reward was a crucial three points that will convince everyone their Premier League survival is far more than a mere pipe dream.