A tactical analysis of Everton’s first defeat of the season, in which Pellegrini outfoxed the Premier League’s tactical fox.

Share All sharing options for: City 3 - 1 Everton: The Tactics

In desperate need of three points, City dealt visiting Everton their first defeat of the season. With a renewed confidence and a more determined front line, City returned to winning ways, avoiding a third consecutive defeat that surely would have sent the Blue half of Manchester into a panic. 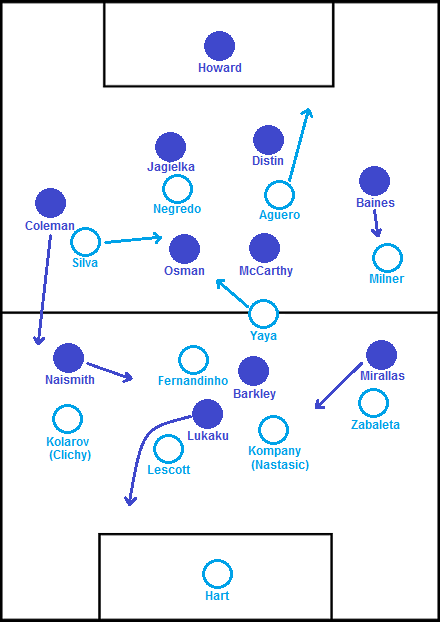 Having been well and truly beaten by Bayern mid-week, Pellegrini made a host of changes for this match: Milner in place of Navas, Negredo for Džeko, Silva for Nasri, Kolarov for Clichy, Zabaleta for Richards and Lescott (shhhh, I know) for Nastasić. And while the formation stayed the same, the work-rate up front was noticeably different leading to a change in style (and result).

Meanwhile, Everton played in a 4-2-3-1 with the Kraken, er Lukaku, leading the line. With Osman and McCarthy playing in a double pivot, Naismith, Barkley and Mirallas were free to stay higher up the pitch, offering support and possession to the Belgian striker.

As City and Everton are two of the more fullback oriented sides in the Premier League, the tactical battle on the flanks was certainly a key area to watch. By starting Milner on the right, Pellegrini essentially man-marked Baines out of the game, as Milner retreated deep to track Baines on each of his forward runs. This left Zabaleta free to track Naismith and Mirallas inward as both players (Naismith in the first half and Mirallas in the second) often moved into the space vacated by Lukaku’s brilliant runs into the opposition’s left channel (more on this later), effectively limiting both players’ involvement in proceedings. City’s left flank was quite another story however, as Silva routinely drifted inward in his free-role, leaving Seamus Coleman as much space as he could want, moving forward to provide Everton’s winger with the overlap.

With Lescott being handed a rare start (perhaps Pellegrini’s way of telling Nastasić he needs to improve), there were sure to be some hearts-in-mouths moments in this one, especially as the more forward-thinking Kolarov started at left-back. Lukaku, for all his strength(s), has an often underlooked gift of movement, routinely getting onto the back shoulder of a defender and rounding him into space. Indeed, Lukaku’s early goal was only a harbinger of things to come, as Lukaku continually drifted off of Lescott’s marking and into City’s left channel, exposing the space between left-back (first Kolarov and then Clichy) and centre-half (first Lescott and then Nastasic as City’s centre-backs switched sides after Kompany's injury).

With Lukaku leading the line with superb holdup play and Barkley and Mirallas making runs around the gigantic Belgian, it really is no wonder that Everton came into this match unbeaten and flying high. It’s a testament to City’s communication (and Pellegrini’s tactics) that Everton only managed one goal in this game, as Lukaku consistently found open areas only for the final ball to be less than what was required.

There is little doubt in my mind that Negredo has (deservedly) transplanted Dzeko in City’s XI, as the Spaniard has become a regular scorer and perhaps more importantly, a consistent and ferocious presser. In much the same way that Bayern’s Mandzukic brings never-ending energy to a long list of other skills, so too does Negredo compliment his skillset with an altogether vital commitment to the pressing game. From one touchline to the other and from halfway line to the byline, Negredo never stops moving: when the opponent has possession he moves to win it back or to force mistakes, while in possession he moves to make himself available to any of his teammates. He’s a workhorse who can finish – a far more brilliant purchase than I ever could have expected.

When paired with Negredo, Agüero is actually free to make more attacking runs and forward movement than with Džeko, knowing the Spaniard will do the heavy lifting for him. Against Everton, we saw exactly this as the Argentine continually made forward runs into Everton’s left channel (not unlike Lukaku’s movement at the other end), scoring a superb goal from exactly this movement, finding the space between Distin and Baines before running onto a delightful pass from Silva.

As both managers are known for the tactical prowess, I was quite interested in seeing how each would approach their substitutions in the second half (especially after Pellegrini was forced to use two of his three for injury purposes); and in this regard, Pellegrini absolutely came out the victor.

Prior to Aguero’s penalty and down just one, Martinez made a double substitution in the 63rd minute, replacing Leon Osman for Darren Gibson and Kevin Mirallas for Barcelona loanee, Gerard Deulofeu. Two like for like changes with Gibson sliding into the double pivot and Deulofeu replacing Mirallas on Everton’s left wing. Four days on and the changes remain bland and confusing: why, when chasing a goal, would a tactically proficient manager make a double substitution that doesn’t at all change the shape of his side? Every facet of Everton’s approach stayed the same just with new faces – and while Mirallas was rather poor, a like for like winger on the left did nothing (aside from a rash challenge that saw him cautioned) to trouble Zabaleta as Milner simply dropped a bit deeper as City began to see out the game.

Having been forced to replace Kompany for Nastasic and  Kolarov with Clichy, Pellegrini was left with one final change and it loomed rather large with previous matches being lost after the Chilean’s substitutions. (In the matches against Cardiff and Aston Villa, City went from a winning position to a losing one after second half substitutions). Replacing Agüero with Nasri, Pellegrini showed great tactical flexibility, willingly altering formations in the aim of seeing out the game. Aguero’s exit saw City shift from a 4-4-2 to a 4-2-3-1, as Negredo took up the lone striker position while Nasri played to the left of Silva who sat beneath Negredo in the middle of the pitch. This change allowed City to (a) keep the ball better in the face of Everton’s late press and (b) defend the midfield more diligently when the ball was lost.

Martinez’s final change seemed less like an ace-up-his-sleeve and more like a running up the white flag maneuver, as he withdrew Lukaku to make way for Arouna Koné: yet another like-for-like substitution. Now down two goals with eight minutes plus added time to play, I expected a more radical, shape-shifting change from the Everton manager; perhaps McCarthy off, Koné (or Jelavic) on, which would have seen Everton move to something resembling a 4-1-3-2 with only Gibson holding in midfield. Instead, Martinez opted for the safe change, perhaps afraid to risk Everton’s goal difference in a match he perceived to be lost.