Share All sharing options for: City 1 - 3 Bayern: The Tactics

A lesson in footballing, that. Given the opportunity to demonstrate a new era in European competition, the hosts failed miserably as Pep Guardiola continued his dominance in matches against Manuel Pellegrini. 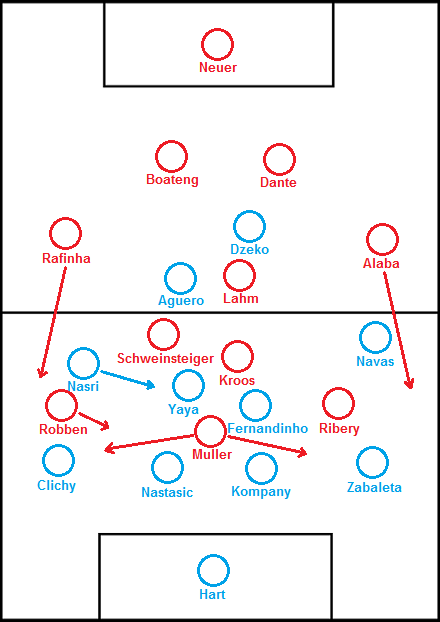 With Bayern playing in their now customary 4-1-4-1 and Pep opting for Thomas Muller in the false nine role, Bayern’s midfield essentially gained a man – adding to their already conspicuous advantage in the center of the park. With Lahm sitting deep and offering support to the centre-backs, Schweinsteiger and Kroos were free to roam, often finding pockets of space and time on the ball.

Pellegrini’s decision to field a 4-4-2 with Džeko and Agüero at the front of the City attack quickly proved a catastrophe, as Džeko routinely failed to press effectively and Agüero offered little assistance to Yaya Touré and Fernandinho in the center of midfield. For a manager touted as a masterful tactician and nicknamed The Engineer, it took far too long for Pellegrini to recognize and address the problems, the most notable of which was City’s disadvantage midfield.

City’s 4-4-2 is really more of a 4-4-1-1 where Agüero is responsible to wander between the target man (on Wednesday’s case, Dzeko) and the midfield. This is far from a problem when City are controlling possession and dictating tempo, but when they’re left to chase the ball (or in this case, Bayern’s shadows) it becomes a huge tactical problem as Aguero is not a natural midfielder but is then forced to play in that position.

Before moving on, it’s worth noting that it wasn’t the crime against humanity that some are making it seem for Pellegrini to start two strikers. In fact, without the benefit of hindsight it’s certainly reasonable to assume that Pellegrini was hopeful that Džeko and Agüero could occupy Bayern’s two centre-backs, leaving the advanced fullbacks exposed and playing Navas and Nasri into space. The mistake was in the slow reaction time the Chilean chose to change the things that weren’t working – something he really didn’t accomplish until the 70th minute.

As a result of City’s disadvantage in the center of midfield, Nasri was forced to come inside to offer some sort of resistance to Bayern’s midfield dominance. This resulted in a large amount of space on City’s left, in front of Clichy and wide of Džeko. Ideally, this space would be occupied by a winger who can exist as an outlet to relieve the opponent’s pressure, however with Nasri now playing as a third central midfielder, that space remained vacant. And this, more than any other, was Pellegrini’s biggest failure. With Philipp Lahm – undoubtedly the best right back in football – playing as Bayern’s holding midfielder, the right side of Bayern’s defense surely offered City the best opportunity for attack. Instead, it remained unchallenged as Clichy was repeatedly driven back by Robben and Nasri was forced to move inside.

While both of Bayern’s inverted wingers present significant danger as they cut inside onto their stronger feet, as Ribery is supported both offensively and defensively by David Alaba, Bayern’s left side was always going to cause quite the headache. And indeed, this is precisely what happened. In much the same way that City exploited United’s right side combination of Smalling and Valencia in the Manchester Derby, so too did Bayern exploit City’s right sided combination of Micah Richards and Jesus Navas. Constantly unsure of how to defend Alaba’s overlapping runs, Navas and Richards tried just about everything: from Navas picking up Alaba’s runs while Richards stayed tight with Ribery to Navas switching to Ribery as Richards attempted (quite poorly) to play Alaba offside. Yet nothing worked and Alaba caused significant problems all night.

The interchangeability that Bayern found by playing Muller in the false nine role caused City problems in every area of defence. While he looks like little more than a gangly scientist who accidentally stumbled upon a football stadium, Muller is a master of finding and exploiting space, constantly pulling defenders out of position and thus opening areas for Ribery, Robben, Kroos and Schweinsteiger to move into. Kompany and Nastasic were often forced out wide to track Muller’s movement, leaving far too much space between the midfield pairing and the defensive line.

Speaking of the midfield pairing, it’s become abundantly obvious that Fernandinho and Yaya Touré are liabilities without the ball. Neither is especially aware in a tactical sense and neither plays with much positional awareness. As City are rarely outpossessed, this has yet to become a major problem (although they did look lost for long sections against Hull) but given that City’s goal is to progress from the groups and deep into Europe, it’s an issue that needs to be addressed going forward.

Down just one at halftime, it looked necessary to everyone save Pellegrini that changes were necessary. But the Chilean manager changed nothing, opting instead to stay with a 4-4-2 leaving Džeko (who was incredibly poor in the first half) and continuing to use Agüero as the link between the midfield two and Džeko. However, once Muller scored in the 56th minute to double Bayern’s lead Pellegrini had to do something and to no one’s surprise it was Džeko who made way for Negredo. And while the Spaniard brought more energy and interest than Džeko seemed to manage, without changing the midfield dynamic, City still struggled – noticeable when Robben scored to make the game 0-3 in the 60th minute. Shockingly, it took ten more minutes for Pellegrini to use his last two changes: Silva on for Agüero and Milner on for Nasri, a double change that saw City move to a 4-2-3-1 with a legitimate #10 (Silva) instead of a second striker.

And the game slowly turned. With three in the midfield and two proper wingers, City’s shape now caused Bayern problems. Kroos and Schweinsteger were more bothered by Silva’s presence in the midfield than they had been previously by Agüero, while Milner offered City a release valve on the left. And while the home side did come into the game after the double substitution, it must be noted that Negredo’s goal came only after Schweinsteiger and Robben were subbed off – an example perhaps of Bayern letting up too early. Indeed, if Yaya Touré isn’t hacked down by Boateng or if Silva’s ensuing free kick slips under the bar rather than hitting it, the home side would have been down just one with three minutes and stoppage time to play.

It was a nightmare performance from the hosts on a night when City had the chance to announce themselves on the European stage. But in the end, it changes very little: the consecutive home and away ties against CSKA were always the matches that would decide who would finish second in this group and that looks all the truer now. In fact, it might prove a positive as Pellegrini will surely be forced into a more pragmatic tactical approach the next time out.

Meanwhile, there are still lingering concerns that need addressing: Hart’s puzzling and troubling form (it could be massively beneficial at Club level if Hodgson were to give Forster or Ruddy a chance in goal if only to remind Joe Hart he’s not undroppable), a once impenetrable defence is leaking goals, and a lack of consistency throughout the side – a problem that cost all three points in the away games at Villa Park and Cardiff.

More from Bitter and Blue: