A tactical analysis of City's (much deserved) first away win of the season.

Share All sharing options for: City 3 - 1 West Ham: The Tactics

With Pellegrini feeling the pressure to get a result away from home, the Chilean opted for a centre-back pairing (that unduly lit Twitter ablaze) while seemingly finding his preferred strike partnership. 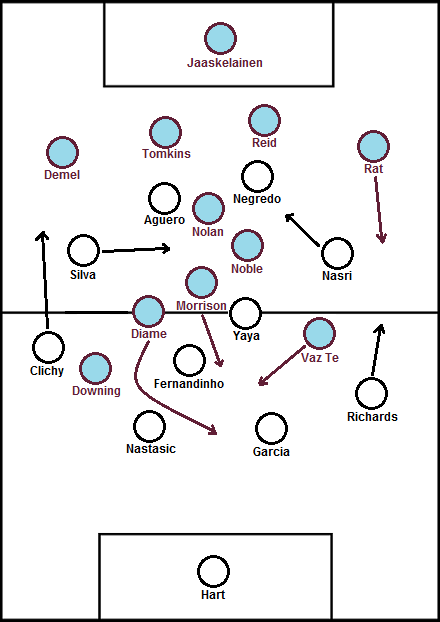 Allardyce opted for the same 4-6-0 formation that gave Tottenham fits just before the international break, so a pre-match worry was that City’s back line might struggle to deal with the lack of a striker (and therefore no positional place holder) and the midfield might have no space to work in. But these concerns proved ill-founded as Nastasić and Garcia were positioned well throughout and Fernandinho and Yaya, operating in more of a double pivot than in recent weeks (a tactical wrinkle to watch today against CSKA), dealt well with the center of the pitch, leaving Silva and Nasri free to drift in and out of any available pockets of space.

West Ham’s current formation (one that will probably be abandoned when Carroll returns from injury) affords the Hammers a wide range of tactical flexibility – and whatever you might think of him Allardyce is actually a rather astute tactical mind. In defence, the 4-6-0 allows the side to defend in large numbers as the back line of four is shielded by two deeper midfielders (Noble and Nolan) who themselves are shielded by another wall of four (Downing, Diame, Morrison and Vaz Te). When going forward, the team looks a bit like a 4-1-1-4 as Nolan stays the deepest in an effort to protect his centre-backs. The object of a striker-less system is to remove the centre-backs positional placeholder and rely on multiple forward runs from the midfield to the same area of the pitch in an effort to catch either of the CB’s out of position. Indeed, this was precisely what happened to Tottenham two weeks prior as Dawson and Vertonghen were lost in a positional sense, allowing the forward runners to get in behind on several occasions.

Against City however, West Ham’s four forward midfielders struggled to bother City’s backline as Nastasic and Garcia justified their starting roles while Richards played quite well at right back. Admittedly, City’s one obvious defensive error resulted in a rather spectacular goal by Vaz Te, who himself was responsible for leaving Agüero unmarked for City’s second goal, but it’s hard to see West Ham’s formation as the primary catalyst for their goal.

Leaving Lescott on the bench, Pellegrini opted to pair Matija Nastasić with Javi Garcia – an unpopular choice according to Twitter – perhaps to save Lescott for the all-important away trip to Russia in midweek. Regardless of popular opinion, Garcia performed quite well, successfully completing all seven of his attempted clearances while winning 5 of his 6 aerial duels. The criticism he’s received for West Ham’s lone goal is entirely unwarranted as it was actually Nastasic who was responsible for switching off his man to step forward in the box.

Playing Garcia at centre-half adds a certain level of passing and composure that the team lacks when Lescott is chosen. Knowing that Alardyce would most likely revert to the same 4-6-0 formation that proved the catalyst for West Ham’s away win at Tottenham two weeks back, Pellegrini may well have chosen Garcia for his superior passing ability and presence on the ball as the center-backs would be less concerned with marking a striker as they would be with playing possession and preventing runs from deep lying midfielders – something that Garcia is more suited to than Lescott.

More to the previous point, the centre-back pairing was asked to pass (and keep) the ball at a high rate, as West Ham couldn’t afford to press until City entered their half. Thus Garcia (56/61) and Nastasić (64/68) attempted 129 combined passes while completing 120 of them (93%). For reference, West Ham’s centre-backs, Winston Reid (26/37) and James Tomkins (33/37) completed just 59 of their attempted 74 passes (80%). In fact, both Garcia and Nastasić completed more passes than West Ham highest player, Mark Noble, who completed 51 of 65 attempted passes – a testament not only to the Londoners’ tactics and style, but also to City’s possession dominance.

With Richards replacing Zabaleta, City enjoyed an aerial advantage that saw them win 21 of 29 total aerial duels (an impressive 72.41%) and successfully complete all 13 attempted headed clearance, with Richards himself winning all four of his aerial duels.

Tell me, with a performance like that, just how exactly Džeko is to make Pellegrini preferred XI? Their movement, their linkup play, and their understanding of each other’s style makes for an interchangeability that becomes so crucial when playing two strikers. When one of them makes a run, the other must react to that run – moving into the vacated space, making a secondary run or if one of the two is in possession, playing the pass. Against West Ham we saw all three of these interactions, as Negredo constantly picked up Aguero’s vacated space when the Argentine dropped deep into midfield; but perhaps more importantly, Negredo wasn’t afraid himself, to drop deep, a necessary movement in a two striker system so the interplay doesn’t become predictable, thereby allowing the centre-backs to gain a certain amount of familiarity in a short amount of time.

Shot selection from the two strikers against West Ham was certainly a thing to treasure, as neither player resorted to taking the speculative shots from 25-30 yards out that a certain Bosnian striker seems quite fond of. 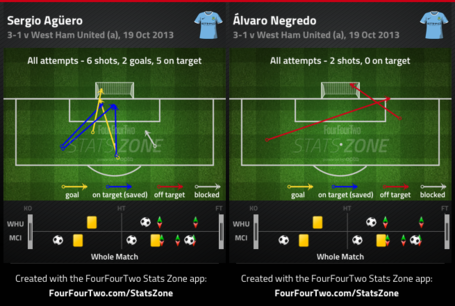 While Aguero and Negredo (deservedly) received much of the praise, it was City’s little wizard, or Merlin, as his teammates like to call him (and the only name I will be calling him from this point on), stole the show. His brilliant goal in the 80th minute sealed City’s first away win this season, but prior to that he played the part of director in this performance.

His passing map could be confused for a piece of postmodern art with only 7 of his 85 attempted passes failing to reach their target (a 92% completion rate) while his heat map shows a player with complete mastery of the game, drifting inward from the left when in possession and tracking back when defensive responsibility is needed. 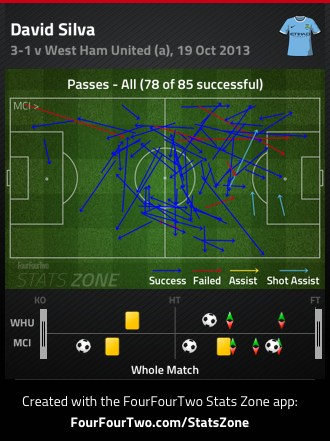 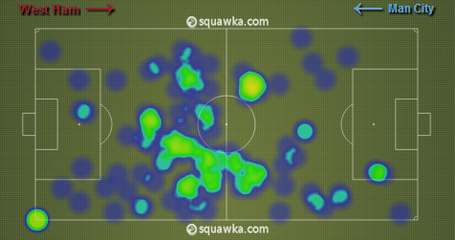 In a team chock-full of expensive superstars, it can be easy to forget just how important Silva is to this side. He’s the type of player who, amid six West Ham midfielders, had absolutely no trouble finding space and playing passes, while simultaneously being the primary player West Ham tried to disrupt. With his creativity and passing ability, he makes this side tick in ways no other player on the squad can, and against West Ham he reminded us of that with nearly every touch.

I’ve been critical of Pellegrini’s substitutions in the past, specifically in the two away losses to Villa and Cardiff, but against West Ham Pellegrini appeared to get his changes spot-on. After Vaz Te’s goal, with West Ham finding themselves behind just one the game began to turn. The home supporters got louder as West Ham pressed harder without the ball and began to pressure City going forward: changes were needed to reclaim the dominance City had enjoyed for the first sixtyish minutes. A pragmatic and careful Pellegrini opted first to bring on Kolarov for Negredo, a change I quite appreciated (although I would have preferred him to leave Negredo and take off Aguero, but that’s really quite preference at that stage in the game) and eight minutes later removed Silva for Milner. Both changes show a rather changed Pellegrini, one who now appears to understand the difficulties involved in winning away from home in the Premier League.