Balotelli By The Numbers

Confirmation is all but in, with only the final price to be confirmed but Mario Balotelli has been sold to AC Milan. We can argue about potential and the amazing skill set that Mario has, but it was all too fleetingly glimpsed when he was in a City shirt. Let's look at Balotelli's City career by the numbers.

Share All sharing options for: Balotelli By The Numbers

So what may be the best method in order to evaluate Mario Balotelli's two and a half year career with City? For me it's best to look at league performance. That provides us with the largest sample size, and it has been, arguably, City's number one priority over the previous 2 years.

So let's look at Mario's 3 seasons with the club, with a focus on minutes played, time on pitch %, shots, shots on target and goals. Naturally any purely statistical evaluation will not include details on the ability of Man City's strikers to make intelligent runs, clever passes, display excellent build up play. Those aforementioned abilities can be subjective and heavily influenced by opinion and personal like or dislike for a certain player.

Best to stick to the numbers.

Man City's Strikers By The Numbers

Of course we cannot solely list Balotelli's numbers, they need context and a yardstick by which to measure them. The best way to do this is to include City's other strikers, who play with the same quality of team-mates against the same quality of opposition. 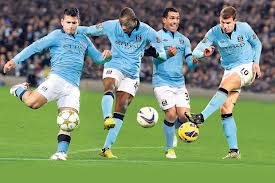 These are the rough numbers for City's strikers all the way back in 2010/11.

It was a mess. there as some Hall of Fame 'biggest flops' among this list, namely Adebayor and Jo. I didn't include Santa Cruz as it would have taken me more minutes to process his stats than the actual minutes he played for City that year (one sub appearance).

Basically this tells us Tevez did it all on his own, Dzeko came in January and pitched in with minutes if not goals. My God, how vital was Tevez in helping us qualify for the CL.

Balotelli scored a handsome 6 league goals whilst only playing 589 minutes. Impressive, but there are small details like substitue effects at play here (more chances, shots, and at times, goals, are created in the last quarter of the game, the last quarter is when subs usually appear).

Not too much to evaluate from 2010/11, which was Balotelli's first season after a gigantic £23m summer move. Mario spent substantial time out with a recurring knee injury, which limited him from securing a run of games in the side.

There's a pretty good resource here on City strikers in 2011/12, including selection trends, home and away form and records with certain strike partners.

Before we get to Balotelli, it's useful to note just how similar Tevez 2010/11 and Aguero's 2011/12 seasons were. this is what is expected from a genuine #1 striker.

This was Mario's best season in a City shirt. the season of the 6-1, the assist, the chested goal. He was very good at times. And very bad at times. The sendings off, the dreadful Arsenal away performance where he seemed to poisoning everybody, even the mild mannered Aguero.

Balotelli's numbers are strong, though. Yes, we have the substitute effect that Dzeko also prospered from to a lesser extent, but Mario managed to score 13 goals whilst only playing 38% of the total minutes, his shot numbers are strong as are his shots on target numbers. It's a good record and it was a step forward of sorts, if we ignore some of the more unsavoury moments from that season.

The disappointing thing for Mario that season is that he didn't play more. There were many minutes available to him, what with Tevez's exile and Dzeko's patchy form, but Mario, through suspension, injury and poor form just didn't capaitalize.

City' strikers are all stuck in a genral funk of sorts. the goal numbers and shots numbers are down and tracking well below the best performer in the previous two seasons. Tevez has been Man City's #1 striker this term, but he hasn't scored like a #1. Drops too deep, doesn't have a good enough shot, or has the quality of chances provided not been that great?

On Balotelli. Again, the minutes tell us he has been the 4th choice striker, in fact he has never been more than the #3 striker during his City career. Mario's goal total is very poor, but that cannot be blamed on his total number of shots but instead it can be blamed on his inability to get shots on target. If you are a striker and you you managed only 6 shots on target at a rate of one every 97.5 minutes, you will simply not score enough goals to retain your place in the side.

This season for Balotelli has been a disaster on the pitch. Not enough good performances, not enough countable, positive signs and there seemed to be a lack of trust from Mancini toward the player. Mario's totals in the Champions League again allude to that lack of managerial trust in big games.

The one thing that stands out is the opinion of nearly all of us in thinking Balotelli is a very gifted player, with all the attributes to be one of the best, but those opinions don't fit with his City career. This 'talented' player has never been higher in the striker depth chart than #3. His goals and shots totals tell the same story, he was never better than 3rd choice. We know he is young, and certain considerations have to be given for his age, but he is 23 now

So what gives? How can this potentially world class player have had such little impact in proportion to his storied talent and potential?

Did Mancini not fancy him? Unlikely. Mancini, at times, may have been his only protector at the club, it may well boil down to the fact that City had better striking options at the club than Balotelli. Those players were performing better than Balotelli, thus Mancini trusted those players more, and trusted Balotelli less. This may be the one, purely footballing, reason for the lack of minutes played in comparison to his team-mates.

This season the minutes have dwindled further, the performances in terms of shot and goal creation have dropped off markedly and now he has gone.

Yes Mario is a talented player, he has shown us that talent in certain games, which was last seen for Italy at the Euro's, but the bottom line is he just has not shown us that talent and high level of tangible performance consistently during a game, or a run of games, or a season, or, his whole City career.

Whichever way you slice it, Mario was unlikely to become that world beater at Man City.

Yes, he was young and his performances may have improved, but this seasons numbers go against that supposed upcurve in performance. The cold bottom line is Man City managed, somehow, to secure a fee of £23m for a fourth choice striker, who at 23 years old, has seen his performances not only stall but regress.

Good Luck, Mario. I hope you fulfill that potential and become a world beater.