With captain Vincent Kompany out against QPR, will the makeshift defense be enough to beat bottom of the table QPR?

QPR really really stink - It is amazing to me that players are still wanting to go to Queen's Park Rangers. Loic Remy chose to go there over Newcastle, and now Peter Odemwingie wants to leave West Bromwich Albion (who could have their highest finish since 1981), and go to QPR. I don't get it. Why are players still trying hard to get on board of a sinking ship? I think that they will stay up this season (barely, but Aston Villa will win the race to the bottom). Problem is, now it looks like the man financing all the ridiculous transfers (£30m this season) might be on his way out. This whole team has a distinct scent of doom hanging over it. This leads to another discussion that should be had about the level of spending that promoted teams should do.

Oh Vinnie - Our beloved Manchester City captain Vincent Kompany is out of action for somewhere between 2-3 weeks (with more information coming after testing) with a calf injury, and intrepid teenager Matija Nastasic is doubtful with a knee injury. So how will City line up in defense? Joleon Lescott is available, but there is a reason that 19 year old Nastasic has beaten him out of the starting XI. Kolo Toure is still away with Yaya. Will Roberto Mancini go with a 3-5-2? If he did, he would play Milner, Pablo Zabaleta, Lescott, Gael Clichy, and Kolarov at the back/wing back positions. I think that this would probably work, but would not be the preferable lineup.

With how weak QPR have looked, let's keep them on their back foot. Keep with the 4-2-3-1. Javi Garcia looked much better as a central defender than he has all season as a midfielder (for the first time all season I didn't swear at him. That's major improvement). Why not keep him there next to Lescott? Then play Milner and Barry in the CM spots, and play Nasri, Silva, Edin Dzeko, Aguero up front? Otherwise our options at CB are Boyata or Rekik. Boyata hasn't played in the first team in a few seasons, while Rekik looked very green when he got the start against Reading back in December.

How will the midfield play? - Our midfield has been absolutely dominating recent games. Barry and Garcia together have proved to be an effective shield, and have worked well with David Silva, as he continues to show why he is one of the most dominating Premier League players. Only thing is, Silva has done it with Milner on the opposite wing This allows Silva to move inside more, as Milner stays outside on the attack. More importantly, Milner is a animal on defense. He has a burning desire to win the ball back and puts opposing teams under tremendous pressure. If Milner is put in a central position with Barry (as I think he should for this game), how will Nasri do filling in?

Milner and Nasri - How do they compare to each other on defense? I compared them first in an average game, and then their season stats against each other. 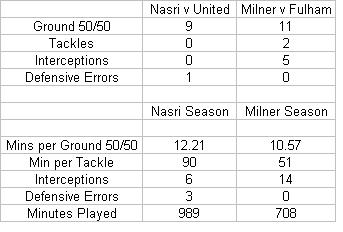 To me it shows that Milner is a vastly superior defender. He makes tackles more often (every 51 minutes compared to every 90), and wins 50/50 ground balls more often too. Despite the fact that he has played over 39% fewer minutes for the season (a travesty in and of itself), he has made double the number of interceptions, and no defensive errors (compared with Nasri's three).

The obvious counter is that Nasri is an attacking midfielder more than a defensive player, and this is true. My interpretation of our form with Milner in the side is that we play better when he is lined up opposite David Silva, and that is in no small part due to his defensive prowess. I would like to see Milner get more starts for the rest of the season, especially in games where we need some defensive presence in the midfield.

Aguero, Tevez, or Dzeko? - While we've been on a great run of form lately, there has been one issue that I feel has been overlooked. Our strikers are still not pouring in the goals. In Sergio Aguero's last 4 games, he scored twice, and got an assist. Carlos Tevez in his last 4 has scored 0 goals, and gotten 2 assists. Dzeko's last 4 have produced 1 goal and 1 assist. Our 4 main strikers have scored a combined 26 league goals (Dzeko 10, Aguero 8, Tevez 7, Mario Ballotelli 1) so far this season. That's only about 1 per game, and certainly not the level they should be at. Not when Robin van Persie has thumped in 18 league goals, and Luis Suarez 16. 7 goals is right in Fernando Torres' range. Surely our strikers can do better than that, and should be expected to perform at a higher level than 'Nando is at.

So how does Mancini line up his attackers? I hope to see Dzeko and Aguero paired together. Tevez has looked off for the past few games. His passing is good, but he holds on to the ball for too long, trying to find the perfect shot. He'll start with it on the left, and then just keep going and going and going before shooting it over the goal entirely. Dzeko has looked sharp lately, with good movement that draws defenders in, creating space. That space allowed Silva room to score two goals against Fulham. Aguero should be able to move around in that space too.

Score Prediction - I predict that Manchester City will put 4 past a reeling QPR defense, but that QPR will also end the run of City clean sheets with a goal past a patched over City defense. City 4 QPR 1