A look at Pace in football

Share All sharing options for: A look at Pace in football

A couple of months ago, I was looking at some models for predicting total goals in a game, and it struck me that, in addition to using Total Shot Ratio to examine how dominant a team is, you could make an additive metric from the same data to look at how fast a team plays. Instead of taking a ratio of shots for and against for each team, you add the total shots together to get one number. For want of a better word (and because it matches up with what other sports use), I'm calling this metric Pace.

Why Would You Look At Pace?

One of the layers of analysis added to both American Football and American Basketball in recent years, is the attempt to control for how fast a team plays. The faster an opposing team plays against your defense, the more points you are likely to give up. Compare the "7 seconds or less" Phoenix Suns era with Steve Nash under Mike D'Antoni to basically any team coached by Mike Fratello (perhaps the NBA coach whose teams had the fewest possessions per game during the shot clock era) and you will see a massive difference in possessions per game for each club. In order to control for this, teams started to look at offensive and defensive efficiency, measures that examine how many points you score/give up per possession.

Unfortunately, "possession" is far more difficult to define in football than it is in either American sport. For our sport, we usually represent possession as a percentage of game time the team has control of the ball, and that works pretty well. In this case, I have chosen to use Total Shots in a game and see where it leads.

The speed at which the game is played affects basically everything else in the game. Higher tempo yields more passes, more tackles, more shots, etc. More running equates to more fatigue (which logically should mean more goals late in a game), and also to more scoring chances for both sides. In most cases, you would expect teams with a high pace to also have a lot of goals scored in their games, and the data generally bears this out.

There are two extra things to like about this metric. The first is that it is fairly intuitive. By looking at how many total shots are taken in a particular team's games, you get an idea of how fast the ball and players fly up and down the pitch. To some extent it also explains how exciting a particular team's games are likely to be. The second thing I like about this stat is that it translates across leagues and - if you can find the data - across eras. You can use it to compare various World Cup eras against each other, or you can also use it to look at how quickly teams play the ball across leagues and countries.

Dataset: The data here is from complete seasons in EPL, Bundesliga, La Liga, Serie A, and Ligue 1 from 2009-2012 taken from WhoScored.com.

Pace Across Leagues charted next to GPG

There are two interesting things about these numbers. First, Ligue1 operates at only about 1 shot less per game than Bundesliga, yet the difference in Goals Per Game is .45, which is massive. If you go by converted shot expectations, it should be about .12 GPG difference between the two leagues. If you read my last article, you can probably guess that Bundesliga players put a significantly higher percentage of Shots on Target (36%) than Ligue1. That article doesn't have Ligue1 SoT% included, but my data shows that number as 33.8%.

The second is that Serie A shows up as the second highest paced league for the period in question, something you might not have expected if you were to listen to the traditional rhetoric that Italian football is usually slow and boring.

There is very little variation in these numbers and for the last three years at least, goalscoring across Europe's big leagues has not increased dramatically (though it has shown an upward trend in certain countries, the mean in both Pace and GPG is fairly steady).

I expected Ian Holloway's Blackpool to be at or near the top of this list. Blackpool took a number of scalps early in the season before teams learned to adapt to Blackpool's tactics, and they faded heavily toward the end of the season, just getting pipped for relegation. The West Ham team listed there from the same season (managed by Avram Grant) was also relegated, despite featuring a lot of talent in their squad (including Demba Ba, Scott Parker, and Thomas Hitzlsperger). Playing at a high pace, especially in the English Premier League, can still get you relegated.

As we saw from looking at the stats across countries, Ligue 1 plays at the slowest tempo by a wide margin. Therefore, you would expect to see mostly French clubs occupying the bottom slots, though Schalke somehow snuck in there, and it should be noted, made the Champions League at that pace - something fairly unusual. They even had less than 50% possession that season.

I find it fascinating that Serie A, long-derided for being slow and boring, actually has three of their 20 teams in the Top 5 for Pace this season. I expected Zeman's Roma to be there (they were playing at an absurd 34.4 right before the Christmas break), but Juve and Pescara - sitting at nearly opposite ends of the table, came as a surprise. It's also interesting to note that Liverpool have been really bad at putting Shots on Goal compared to par, while Juventus are putting nearly 1 MORE Shot on Goal than par, but are somehow failing to convert those into goals. 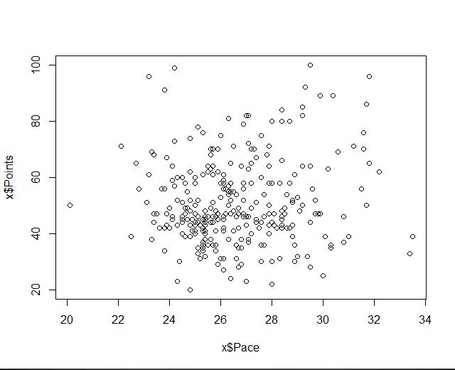 There's basically no correlation, which makes sense. Just because you play the ball quickly (and in some cases, give it back even faster), is no reason to think it is going to result in a lot of victories.

So there you have it, my attempt to quantify Pace in football. Further things you can look at regarding Pace would be using it for fantasy football - clearly you do not want defenders from Roma for their defensive stats - in Italy, Torino's defenders might be a far better choice. You can also use the stat to examine and to control for offensive output when scouting players and generating future expectations.