Has Roberto Mancini been able to maximize the productivity of two of his most prominent attacking players?

David Silva is without a doubt one of the 5 best midfielders in the world. Anyone who claims that their team would be better without him in their starting XI is a liar. Although he started off the season a little slow, over the past few games he has been reminding people of why he is the best attacking midfielder playing in the Premier League.

Samir Nasri is recognized as an elite-level international attacking midfielder. Since his move to the Premier League, he has been on a trajectory to be mentioned with the best playing in England. Unfortunately, since his transfer from Arsenal in August 2011, he hasn't hit the levels that were expected of him.

When I watch Silva and Nasri play together, it frequently seems that they are getting in each other's way. Since Nasri's red card against Norwich, Manchester City have dominated their last three league games. Each one has seemed better than the last. David Silva has been playing his best football of the season, and I don't think that it is a coincidence that it happened while Nasri wasn't in the team.

1. Look at the numbers: Check out some of the passing numbers to see whether they can tell anything about how the two players play their best, and whether they can play at their best together.
2. Tactical Options and Other Ideas: Some of my thoughts about how Roberto Mancini can play Silva and Nasri to give the team the best chance of success. I want to hear other people's thoughts on this. What sorts of tactics and strategies should Man City use down the stretch. How do you think they can make things work?

In the table below, I have bolded the passing statistics for percentages by direction. This shows the position on the field, and whether they move the ball more left or right. 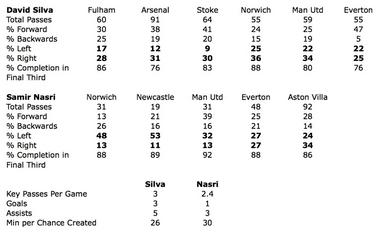 What information can be gained from a look into the stats from Nasri and Silva? These are the main things that I get from the data.

1. To me, reading into the stats shows that Silva plays his best on the left side of the field. The games where City have played the best football recently have been the games against Fulham, Arsenal, and Stoke. In those games, he lined up on the left side. The passing percentages show that his passes went more right than they did left. This shows his tendency to cut in from wide areas into the middle of the field.

Silva always seems his most dangerous when he receives the ball from Clichy on the wing, and then cuts into the middle, allowing him to spot a through ball to a striker, pass across to the other wing, or recycle back through Yaya or Barry. In these games, he did this over and over again. For example, the most successful passes between a partnership in the game against Fulham were between Silva and Gael Clichy, as they worked back and forth, and then as Silva worked across the middle. David Silva has scored 69% of his Premier League goals from the left side of the field (per his profile on the official Premier League site)

2. When Silva and Nasri play together, Nasri typically plays on the left, and Silva becomes much more used on the right. Both players drift in from the wing towards the middle, as their passing % going left and right are much closer together. These games Silva was much less effective, and the offense was stagnant. I believe that this is because both Nasri and Silva are getting into each other's way, and allowing defenders to play in a much more centralized area, rather than having to spread out and cover the width of the field.

How does Mancini work out playing them together? I don't think that he needs to. I think that the more important player to Man City's success is David Silva, and that by playing him on the left, more good chances will be created.

Does this mean to play Nasri on the right? I don't think so. To be honest, I think that the better option on the right is James Milner, who has been playing out of his mind lately. If I were manager, Milner would continue to get playing time on the right wing.

I think that Nasri is surplus to requirements for the club. With several young, highly rated attacking midfielders coming through the ranks (Lopes and Suarez), I think that Nasri should be played to give Silva a game or two off, but that the young players should be rotated in too.

Long term, I would say to keep Silva and play him on the left, and get rid of Nasri at the end of the season. I think that any replacement player would need to be more of an out-and-out winger, who can provide width on the opposite side of the field, allowing Silva to cut inside.

How do you think Mancini should use Silva and Nasri? Should he keep trying to play them together?