One aspect that my growing interest in the numbers and analytical side of the game has provided is the added dimension that it has given when watching games. Granted, at times this can prove a distraction but attending the game on News Year Day against Stoke I was keen to see them 'in the flesh' given how interesting they are from a numbers perspective; particularly in terms of save % and their ability to restrict shots on target. How disappointed I was. Early in the game they appeared as though they were intent on crowding three or four players around every City player who had the ball but this soon dissipated thanks to City's expansive and attacking play and in truth they offered little in the way of resistance. At the halfway point Stoke had allowed just 74 shots on goal, with a 81% save percentage. During the game City had six shots on target (20 in total) and of course converted 50% of them as Stoke's famed defensive profligacy proved, for ninety minutes at least, illusory.

There were a number of players who excelled on Tuesday as City's team unit passed the ball with an impressive urgency and fluency to their game, beginning with the defence and through to the midfield linking with the attack. A key aspect of City's midfield has of course been Gareth Barry - despite 'outside' criticisms - and his performance against Stoke was one that was noticeable for its ability to influence the attack with a longer range of passing than generally expected, as this passing graphic illustrates: 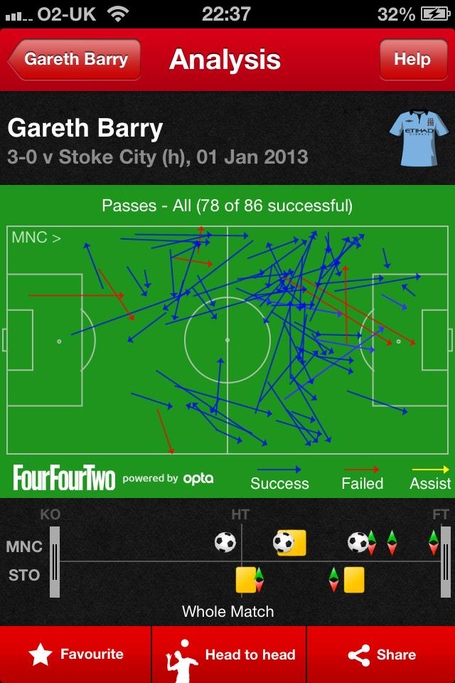 A nice point was made by Simon Curtis over at ESPN that Barry was one of only three players (along with Vincent Kompany and Pablo Zabaleta) who started against Stoke that also started Roberto Mancini's first game in charge some three years ago. As Curtis rightly points out:

The unseen work of those three players, at times unspectacular, always precise and effective, is the bedrock of what Mancini and his staff have achieved thus far and will be the foundation for whatever comes between now and May.

The defeat at The Stadium of Light on Boxing Day signalled the end of the first half of the 2012/13 season and with a growing sense that having fallen seven points behind United, whilst there were problems with City's defence it was at the opposite end of the pitch where City's struggles were more acute and the area City needed to improve upon if they hoped to claw back the gap that United have opened up. The loss to Sunderland highlighted that City weren't getting things right in attack; the balance not quite there, plenty of width but a lack of threat from wide whilst too often they were restricted and playing into brick walls in the central areas. The past two games though have brought a noticeable shift in approach as City appear more direct and are breaking forward with increased pace and greater purpose. Whilst at the halfway point City had a Premier League leading 123 shots on target they wereconverting at only 27.64% (ranked 14th). The past two games however have seen City fire 13 shots on target (having 35 attempts overall) and scoring seven goals in the process, converting at 53.84%.

One disappointment from the win was the injury to Sergio Aguero, believed to likely keep the Argentinian out for around two weeks, and comes at a time when a real spark had returned to his play and he was again on the scoresheet but - like at Norwich - as a constant threat in terms of creativity throughout the game. His interplay withDavid Silva in particular was fantastic to watch and it is fortunate that he may only miss the one Premier League game (away to Arsenal). It does, however, open the door once again for Carlos Tevez to return to the side but could we also see the reintegration of Mario Balotelli back in to the line-up or even an opportunity for fit again John Guidetti, who has been linked with a loan move away from the club.

A topic in the comments thread over at Harkiano's match recap was who has been City's player of the season so far, so, and as promised check out the poll in the post to vote for your halfway MVP. I have included all players who have made ten or more (including substitute) appearances so far.