Where will we see him line up?

Share All sharing options for: Stevan Jovetic at City

I've been wondering a lot lately about where we might see Stevan Jovetic play this upcoming season. As Zac wrote about a few weeks ago, Jovetic gives Pellegrini the ability to change styles and formations. He can play on the left, behind the main striker, or even up front by himself.

While I think that he will swap positions often throughout the season, and even during a match, I want to figure out where he plays his best. I think that by looking through some of the information from @squawka, we can learn some more about this new talent that we have as part of our squad.

First, I looked at the different stats from the big wins that Fiorentina had last season. Here are 5 matches (that they won by at least 3 goals). 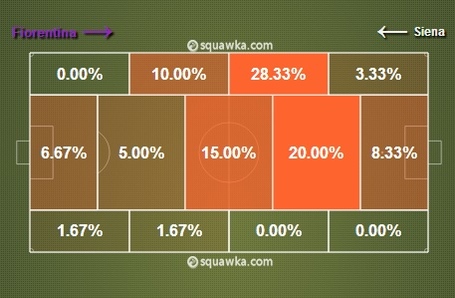 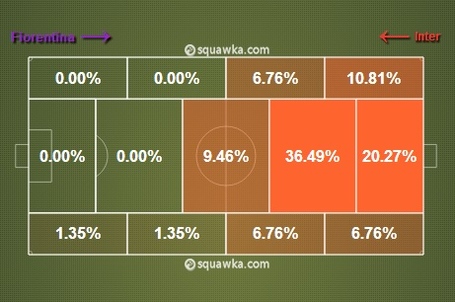 In these 5 matches, Jovetic had 6 goals on 15 shots. His average conversion rate was 34%, nothing to sneeze at. Another key indicator to me is that he spent most of his time in the middle of the pitch in each of the matches. Even in matches where he was out on the left, he cuts inside a large portion of the time. This shows up in his shot location (where he was on the pitch when he took the shot), which almost all came off of his right foot, as he cut inside from the left flank.

In the last two examples, he was playing behind the central striker, and even then he spent a large portion of his match out on the left, cutting inside. Although his shot location was more centralized, even then they tended to be more on the left side of the field. Zac pointed out that 9 of his 12 goals in league play came from the left of the penalty spot.

This shows us what we knew already about Jovetic. He likes to play cutting inside from the left, whether playing on the wing, or playing behind the central striker.

His season long shooting percentage was 51%, and conversion rate was 14.9%. Those are pretty respectable. It's interesting to see his shots that he took. Here's all of them.

That is some quality shooting. Of all of his shots on target, the majority of them were at the bottom two corners. Of the ones that he missed, a good portion of those went wide on either side of the goal. This isn't the shooting patterns of a guy who takes speculative shots, or attempts the spectacular. This is the methodology of an assassin.

It paid off pretty well too. Here are the goals that he scored last season.

Interesting in this section is that Jovetic scored 5 of his 13 goals at the far post. If you haven't already read it, you need to go check out Colin Trainor's treatise on the value of shooting at the far post. For a player that shoots from the left side with his right foot, it's the perfect place to put his shots.

What to do with Jovetic this season?

Part of the weakness we had last season was width. Silva is not going to get us that width. Jesus Navas will live out on the right wing. If we play Jovetic on the left, he'll play about 35% of his time closer to the left touchline. That will allow Silva to pull the strings through the middle, give Aguero more space to work with, and make it possible for Yaya to arrive in the box and not be in the middle of a mosh pit.

If I were to predict how he'll do this season, I think that it'll be a pretty safe bet for him to get 20 goals+assists. He had 18 combined last season, and he's on a much better team this time around.

What do you think?

What are your thoughts about Jovetic? How do you hope we see him used this season? How many goals+assists will he get?