Zone time is a pretty simple premise: How many minutes per game does each team spend in the opponents final third or the middle third of the pith, or their own defensive third. An introductory article can be found here

Share All sharing options for: The Halfway Point in 2013/14: Zone Time

You know when you watch a PL game on TV and occasionally the broadcaster puts up a territory map and it doesn't really make much sense. 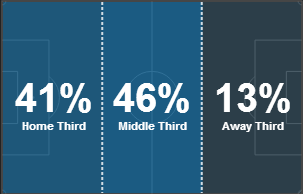 Well, if we convert this percentage (100) into a per 90 number then we can talk about the amount of time each team spends in the attacking zone or the neutral (middle third) zone or their own defensive zone.

This table is sortable so sort away and figure out things like which teams have been hemmed into their own zone, or which teams spend a lot of time in the middle third of the pitch.

Score effects and tactical setups certainly play a part in skewing some of these numbers, so we need to be wary of drawing too many conclusions.

Anyhow the table is up there, so play around with it.

So I took the average number of minutes spent in each zone for all 20 teams and split that information into two groups: first 10 games and the next 9 games. Not perfect, the number of games don't match and there may well have been scheduling imbalances that could skew these numbers, but anyhow, these are the r2 relationships between the two groups of games:

The average number of minutes spent in the defensive zone is the more repeatable of the three of zones that I tracked. Why is that? No idea.

Let's go back now and look at the average number of minutes each team spends in the attacking zone and the defensive zone:

By the naked eye there appears to be a slight relationship between being a team that spends a lot of minutes in the attacking zone and being a team who does not spend a lot of time in their own defensive zone. The r2 between the two sets of numbers above is r2=0.607 which is pretty good, although not great.

These teams pass the 'smell test'. These numbers don't look too far out to what we intuitively know about the good and bad teams of the 13/14 PL season so far.