Per the man himself:

Very pleased and honored to announce my new 6 year contract with MCFC! I am good here, best fans in the world! Ready for much more trophies!

Kompany of course was one of the initial signings in the ‘new' era, arriving from Hamburg for just £6million soon after Mark Hughes's arrival and has gone on to make over 125 appearances for the club, not only establishing himself as the captain and undoubted leader of the side but as one of, if not the best, defenders in the Premier League; all at just 26 years of age.

Following the extension for Roberto Mancini, this is another important move that has been made. Still relatively young, to tie Kompany, considered as one of the real key ‘untouchables' in the side - alongside Joe Hart, Yaya Toure, David Silva and Sergio Aguero - for such a length of time to the club for what should be the best years of his career is an important statement of confidence for both sides to make.

There is a nice piece up on the official site with plenty of comment from Kompany himself, in which he talks not only of what has been achieved so far during his four years at City, but of the challenges and demands that lie ahead:

"For me if you are good somewhere then there is no reason to look elsewhere," the 26-year-old revealed today.

"I have been here since the beginning and I have seen everything at the club change inside and out. I have the feeling that I have contributed to it too. It is good to know that I can be at City for another six years. It is a compliment that the club feels so highly of me.

The position of captain in football is one that is often given far too much credence but following the decision to take the armband from Carlos Tevez last summer, Kompany's stature at City has grown tremendously to the extent that he is positioned as a real ambassador for the club both on and off the pitch, something that should continue towards the end of the decade.

Kompany's numbers since arriving at the club: 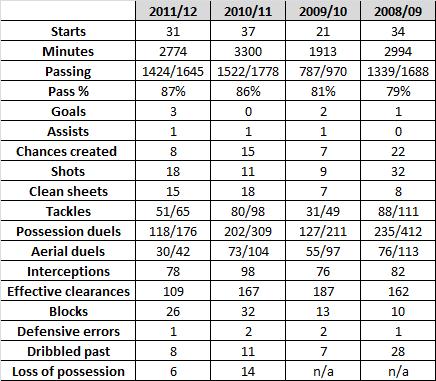