A look at possession and shot advantage

Share All sharing options for: A look at possession and shot advantage

You may well have seen shuddertothink's posts regarding possession in the Premier League (all under the 2011/12 numbers review section) and if not, I recommend you do take a look.

Following on from this I thought it worth taking a quick look to see how the possession numbers compared to various shot measures; i.e. is there a correlation, and if so, is there one that more aligns itself to possession? It is something that has been looked at closely in hockey, with certain measures thought to serve as a proxy for possession.

I looked at three separate shot measures for the purposes of this short analysis: Total Shots, Shots on plus off Target and Shots on target plus Shots Blocked. The three all have the origins in the world of hockey analytics and Total Shots and Shots on and off Target are in essence Corsi and Fenwick numbers respectively (which, for the purposes of this post is what I have termed them as), whilst Shots on target plus Shots Blocked (suggestions for a name anyone?) was a measure I felt of most value in football as it discounted shots off target.

In terms of a ‘pure' shooting measure, my own (and shuddertothink's view is that SoT+SoB is the most effective in measuring shot 'value' given that in football - unlike in hockey - a shot that is off target is truly of no value in that possession is then ceded to the opposition, whereas in hockey the likelihood is that the puck remains in the offensive zone with a chance that possession is also retained.

The following graph charts all four categories (possession plus the three shot measures) through the 38 individual games of the 2011/12 season: 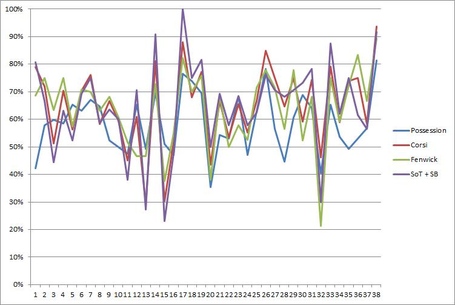 For ease of reading, the following table breaks the numbers down for each of the measures. The results are fairly mixed and probably not what entirely what was anticipated; the expectation was that Corsi would most closely correlate with possession (being that it encompasses all shots), but the Fenwick measure was the closest to possession on 18 occasions, SoT+SB on 12 occasions with Corsi the closest measure just eight times during the season:

There is - and a caveat to this is the small sample size of just one season - therefore an indication though that a teams shot advantage does correlate to their possession advantage, but what is not clear is which of the measures is most closely tied to it.

While there is nothing conclusive at this point I do think there is enough in the number so far to warrant further study of this area and it is one of the areas I will be looking at more closely at throughout the 2012/13.