Share All sharing options for: Manchester City 2011/12 by minutes played

One area that City fared well in during the 2011/12 season was in their exposure to injuries. I touched upon this subject in a recent post which coincided with some work I was doing in looking at the numbers in terms of how Roberto Mancini utilised his squad.

The Italian used twenty-four players over the course of the campaign, but included in this was just one start and four substitute appearances from the on-loan David Pizarro and a single appearance from the bench from each of Abdul Razak, Owen Hargreaves and Nedum Onouha.

It was interesting to note that the issue of playing time was cited as a key reason in determining which club Eden Hazard would ultimately join; the feeling being that at City he would struggle for minutes. This though is perhaps not entirely true as we can see from the graphic showing a breakdown of the total appearances, starts and substitute appearances (after the jump):

For all the talk of rotation it was clear that Mancini had a trusted ‘core' in terms of starts. Hart, Silva, Barry. Aguero, Yaya Toure and Kompany all played in excess of of 75% of City's minutes - which is noticeable when comparing to both Manchester United and Chelsea who had just three apiece who achieved this figure.

Three players who featured in over two-thirds of the games were Edin Dzeko (30), Adam Johnson and James Milner (26 apiece), yet all had far lower numbers in terms of minutes - Dzeko and Milner around the 45% mark whilst Johnson featured just 33% of the time, often late in games: 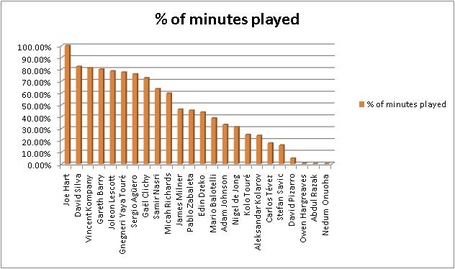 There was also much talk of Mancini not finding a settled or preferred full-back pairing and whilst Micah Richards and Pablo Zabaleta largely shared the load (with Richards have a little more of the time) we can see that Gael Clichy was far and away the preferred choice on the left, with Aleksandar Kolarov barely used at the end of the season and saw action just 25% of the time. 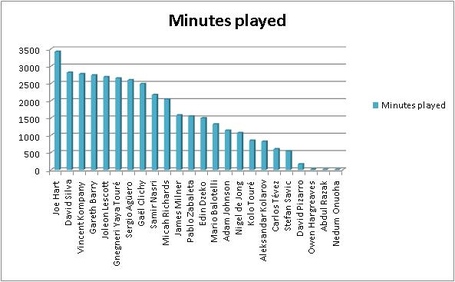 Two interesting players were Samir Nasri and Nigel de Jong. Both finished strongly and featured plenty during the run in but their overall numbers were on the low side, indicating that at points during the season they fell out of favour with Mancini in terms of selection (with de Jong also suffering from injury).

The following chart is an interesting one as it shows a high number of players in the >75% and <25% categories, of course showing that there were players who Mancini leaned on heavily, and those who were no more than bit part players: 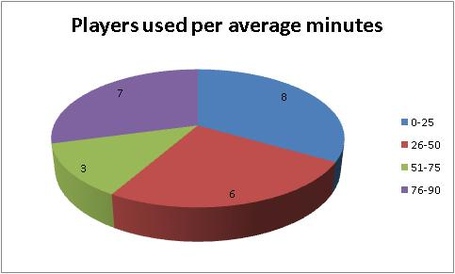 Whilst it is important to have this core in the side - which went a long way to ensuring City eventually secured the title - Mancini will be wary over an over-reliance of this group of players, particularly with the demands and expectations of the Champions League next season, with this seasons exit allowing City to solely focus on the Premier League.

This will mean that the likes of Milner, Johnson, de Jong and Balotelli - players who featured but perhaps less than anticipated, will have to step up in order to win a greater trust from the manager or two or three additions to the squad will be needed to ensure City are able to successfully compete on all fronts in 2012/13.