One of the features of City's dip in terms of results in recent weeks has been the fall off in the form and production from David Silva.

For my latest piece for EPLIndex I took a look at some of Silva's key numbers for the season and also breaking them down to to 'seasons within a season': August-January and February-March to assess what differences there have been (also adjusting these two categories based on the minutes played over both to be able to compare with the overall season numbers).

The key thing that I found was a stark decrease in terms of his creativity - namely his ability to influence and impact a game and I thought it worth posting up the graphic showing the numbers from these areas: 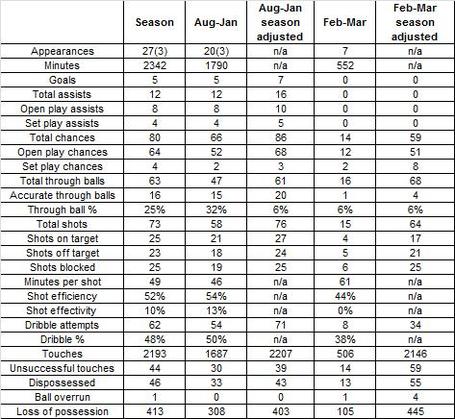 The full article can be viewed here.