Predicting the title run in by numbers

Share All sharing options for: Predicting the title run in by numbers

As we enter the final third of this years Premier League I thought I would take a shot at predicting if Manchester City, after all these years without a League title can finally win the thing. It's been a long, long wait.

After the jump I am going to use a mix of stats and projections to try and predict if Manchester City can win this thing.

First off we need to look at the underlying numbers to show just how good City's form has been through the first 26 games: 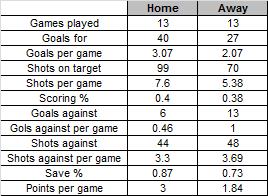 Now, a quick explanation of some of the key numbers above: every statistic in the home column for Man City is ranked #1 in the EPL. Every stat. It is a remarkable feat and a full testament to the strength of form displayed at the Etihad Stadium this season. The standout numbers there being over 3 goals per game and nearly 8 shots on target per game.

Also, Joe Hart's save % being at 0.87 when the league average is 0.69 and a goals against average at 0.46% per game shows us that this is not just gung-ho offensive football, but a controlled, disciplined demolition of teams who visit here.

Now for the away numbers; Not quite as spectacular. City are ranked number one in the league in goals scored, least goals conceded and behind only Manchester United in average points per game.

We can see when comparing the away numbers to those at home, that the goals scored and goals per game are down. More importantly, we can clearly see that although the shots against per game stay similar (44 to 48) the save % drops drastically from 0.87 at home to 0.73. This is a curious statistic. City are conceding a similar number of shots yet shipping in more goals. Could it be the quality of the shot is better? More pressure form corners or set pieces? Either way the 0.73 save % is still above the overall league average of 0.69%.

Neither should we be too critical of the teams away performances or the managers tactics away from home. There is, to some extent, truth in the adage that it is more difficult to play in the oppositions stadium with all the pressures that they bring to bear on the visiting team.

Manchester City are still ranked second in points gained away from home. The chart above, even more so puts into context the tremendous home form.

What does it all mean?

There are two different scenarios I have worked on with regard to predicting the remaining fixtures:

Scenario 1) Manchester City continue their blistering home form, scoring at 3.07 goals per game and conceding at 0.46 and collecting near full points from here on in. My prediction 5 wins 1 draw.

Away from home the seasons trend is is at 1.84 points per game and Manchester City continue that trend despite recent away troubles and pick up near enough the projected points total of 11. My prediction 3 wins 1 draw 2 losses.

Scenario 2) The slightly less optimistic projections would indicate that it is impossible to win every game at home. In this scenario I have budgeted for a loss at home (possibly in the derby, with all the catastrophic implications that could have). It is difficult to see where we may drop points at home considering the data we have, considering the 7.6 shots per game and 3.05 goals per game average, but it may happen. Sequences like this don't go on forever. My prediction 5 wins 1 loss.

Away from home the second scenario is more bleak. The seasons points per game average is 1.84 but in the last six games Manchester City has gained only 1.18 points per game and it is this number that may prove to be of the most importance.

1.18 points per game away from home is too low to sustain a title challenge in the vitally important pressure months of April and May.The relatively low save % of 0.73 and in my opinion the drop from 3.07 goals per game at home to 2.07 goals against away is just as pertinent as the saying that defence wins championships (to use NFL parlance). Scoring a goal per game less on the road than at home may ultimately prove costly. Further to this, only three goals have been scored in the last six away games. This correlates directly with the low points per game average of 1.18. My prediction 2 wins 2 draws and 2 losses.

Scenario 1 would have Manchester City gain 16 points at home and 10 points away for a total of 89.

Scenario 2 would have Manchester City gain 15 points at home and 8 points away for a total of 86.

An aside: All mathematical predictions can be derailed by loss of form, key injuries and the infamous pressure that can change strong, decisive teams into shadows of their former selves. Newcastle and even Manchester United have cracked before and many more teams will do so in the future.

This is a two-horse race for the EPL title and the pure math says these things about the contenders:

Could it ultimately really be that close?