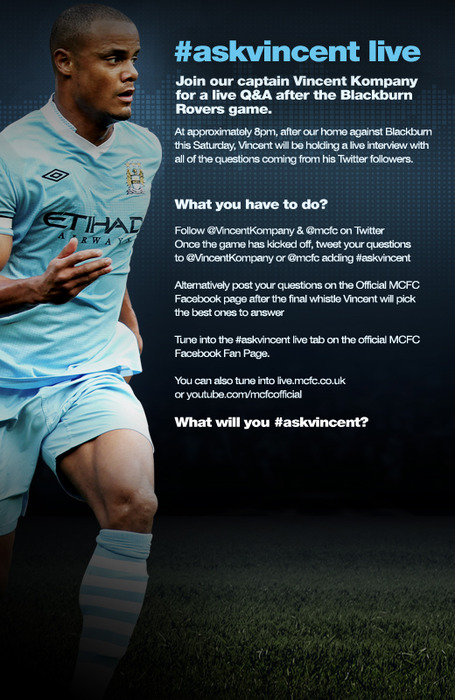 After the final whistle of City's clash this Saturday (25th) at the Etihad Stadium against Blackburn, the skipper will face the media as usual; however this time, it will also be the fans asking the questions...

Fans are being given the chance to ask their questions by simply tweeting their requests to @vincentkompany, using the hashtag #askvincent. Supporters not on twitter need not worry, as they can also post their questions on Vincent's Facebook page: www.facebook.com/vincentkompany.

The interview will also be streamed live across:

"Ask any athlete and they will tell you, when the final whistle rings out, it's either the best or worst of feelings. The way the media watch a game is completely different compared to the way true supporters experience it. Fans kick every ball, feel every tackle and ultimately win or lose as part of the team, together.

"I just wanted to use social media to give ours fans the chance to have their voices heard, instead of shouting at the TV, wishing the interviewer would ask the kinds of questions that really matter to them."

The live Q&A which starts at 8pm, follows on from Vincent's arrival on twitter last January when he launched his ‘Follow the Captain' campaign, giving fans the chance to inspire the team on derby day.

Vincent Kompany Online:
Vincent has a loyal fan base of over 100,000 fans on Facebook, and since joining Twitter in January 2012, Vincent has quickly established more than 140,000 followers.