Comparing the remaining games for City, United and Tottenham

Share All sharing options for: Comparing the remaining games for City, United and Tottenham

The following post comes courtesy of Rick Ormiston (@rormis) who looked at the current league positions of the remaining opponents for City, United and Tottenham. This was then plotted onto the graphs below to show the average league positions of the teams each of the three sides will face in their remaining games, also giving home fixtures a weighting of 1.5 to give some indication of home supremacy.

Essentially what the data shows is when a slip up by each team would be bad news: The pressure will be on City to get points on the board until 28th March, when their task get much harder. Slip ups by United after 7th April will be costly, whilst up to that point they will have the trickier fixtures, whereas Spurs face a tough task from now on, especially when you take into consideration the fact that they currently reside a little behind both City and United in terms of points accrued to date.

With reference to reading the graphs: the position is as it suggests, the weighted position, taken into account when one of the the three teams plays at home is league position multiplied by 1.5 to give some notion of home advantage. The cumulative positions show the positions of all remaining teams added together and divided by the number of games remaining: 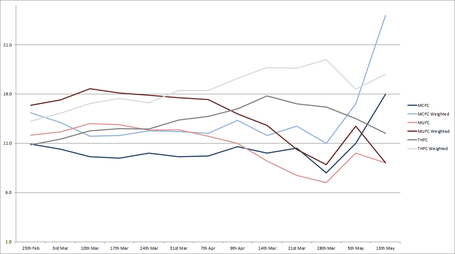