A look at which players are having the greatest effect on their teams scoring in 2012/13 so far.

Inspired somewhat by this post over at nhlnumbers.com onn Individual Point Percentage (or IPP), and having taken a look at City's numbers at a couple of different stages this season I thought I'd run the rule over numbers across the Premier League for the 2012/13 season.

We have seen a few posts that show the percentage of a teams goals that an individual player has scored, but is this really accurate and reflect exactly their contribution whilst on the pitch? Working a little different than in hockey, given that in hockey there are continuous rolling lines, I do think there is some value in looking at it in football and is something that will develop as the season progresses (and I will revisit it periodically),

The basic premise is that you take the points total for each player (goals plus assists taken from whoscored.com) and then calculate the percentage this total is against the number of goals the side have scored whilst the individual player has been on the pitch. This way, you discount goals scored when they have been substituted, are sat on the bench or not in the squad for a game, and in theory should provide a more accurate measure of their worth than calculating it against the overall number of goals the team has scored.

I have taken the top 15 ranked players in the Premier League, which coincidentally is the 40% cut off mark which I think provides a good threshold for players to reach: 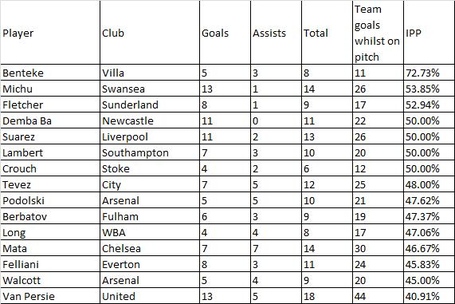 We know that the likes of Michu, Steven Fletcher, Demba Ba and Luis Suarez are heavily influencing their sides goalscoring this season but it is perhaps a surprise to see Christian Benteke leading the way by such a margin, although we should note that Villa's on low scoring total is inflating his figure (contrasting with Robin Van Persie down in 15th place).

We can also see that Dmitar Berbatov, Juan Mata and Marouane Felliani are proving equally important to their respective sides but the inclusion of both Lukas Podolski and Theo Walcott was less expected.

What of City then? Only Carlos Tevez with an impressive 48% takes his spot in the top 15, but both Sergio Aguero and Edin Dzeko (the latter having cooled off of late) come in at joint 19th. We can also see the full breakdown for City's squad as a whole: 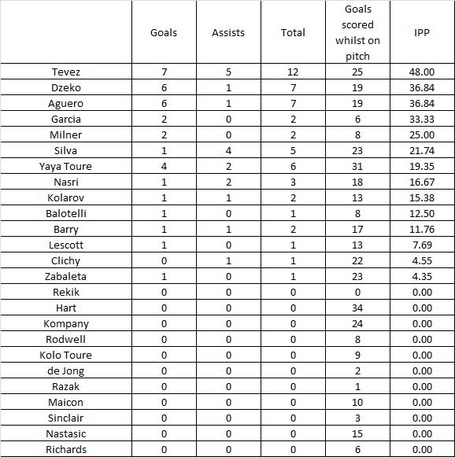 Clearly here the figures are lower given the lower number of points accrued by a individual squad rather than Premier League wide, but focussing on the five City players - Carlos Tevez, Edin Dzeko, Sergio Aguero, Yaya Toure and David Silva - ho have five points are more it does bring up some points of interest when we look at their rolling totals over the 19 games: 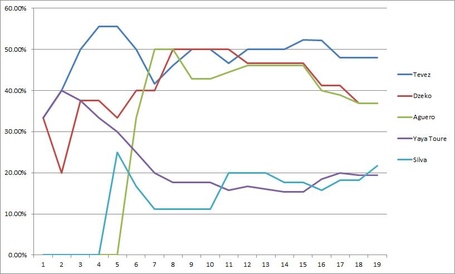 We can perhaps disregard some of the early weeks as it took some players a few games to register their first points, but there are some indications that support the thought that City's strikers have struggled of late. Both Dzeko and Aguero have shown a steady decrease in their totals since week 14, whilst David Silva (post injury) has begun to show flashes of his best form.

The biggest bright spot is of course Tevez who has maintained a consistently high figure and hovering around the 50% for the most part, which is an excellent return.

We saw in this post looking at scoring % that City are a way below the Premier League average, which in turn helps to explain their lower points totals and given their four strikers are 11 goals down between them compared with the same stage in 2011/12 for the likes of Dzeko and Aguero they will need to see an upturn in their % figures over the second half of the season.