Talking points from the weekends games.

1) Pieces of eight! As you all know Chelsea thrashed Aston Villa by 8 goals yesterday, and the goals were scored by seven different scorers. It was a brutal result for a young Villa side who lack experience and composure when the game is getting away from them and it showed yesterday.

Take nothing away from Chelsea who were pacy and direct in attack and who, quite frankly, could have scored more goals. A Benitez team rarely scores so many, but everything worked yesterday. Torres scored, Hazard shone, the Luiz experiment in midfield worked and they attacked as a unit, and yes Villa were complicit in this heavy defeat, but it was still an impressive performance.

If the wins continue to pile up, will the Benitez out bandwagon begin to fade away, if it hasn't already?

2) Goal of the week. There were quite a few decent goals this week, but nothing as brutally clinical as Torres' strong header from 17 yards out. Drogba-esque.

3) Sunderland's Improvement. I have focused on Sunderland quite a lot in the early part of 2012/13, and that focus has never been all that flattering. That will change today, for Sunderland are exhibiting sings of life in recording 2 wins in their last 3 games.

Recording shots on target was a problem for Sunderland in the first ten games and this was reflected in their poor shots on target ratio. This ratio is improving, and quickly.

We see some strong improvement from Sunderland here. Consistent improvement, too, from game 9 onwards; but this improvement has not been reflected in Sunderland's stagnated points per game number.

Here we see the relatively flat-lined points per game number that Sunderland have produced in 2012/13. This number should improve, barring especially bad luck, if Sunderland continue to improve their share of the shots on target in each game. 40 points should be enough.

4) Liverpool Poor last week, World beaters this week! After Liverpool lost at home to Villa last week, we saw the first rumblings of dissatisfaction with the manger, yet after the win at home to Fulham everything seems to be, for now at least, good again. Liverpool, a team with gaps in it's squad and some very young players, had two very different results against two teams with similar levels of competence in terms of away form, is this such a surprise?

Liverpool will need time to improve, the manager needs time, the owners are still learning and the players need games to gain experience of this new system. A purchase of a striker would help, too.

Can patience be displayed, can this season be seen as a development season? I think the club can swallow that, the fans less so.

The commentary is just superb!

Firstly, let's look at Stoke's moving average of shots on target against:

Well, the above graph is in line with what we expect from Stoke. A low goals against total is backed up by Stoke conceding less than the league average in shots on target against. But the difference between's Stoke's low moving average and the league's average isn't that great.

Stoke, quite simply, have an outstanding team save%. This excellent number is built from a few different factors: Goalkeeper skill plays a slight part, luck another part but Stoke's high save% is more likely due to competently executed team tactics, a stubborn defense and, most importantly, a fairly unique PL ability to restrict the opposition from generating any quality shots on target against. At a guess, that would mean Stoke force the opposition to shoot from further out than the average PL team does. How they manage prevent closer range shots on target against would need further investigation.

6) Late Goals. Man City got themselves out of jail again on Saturday against a poor Reading team. It needed Gareth Barry, a superman impression and a piggyback from Nicky Shorey to score that 93rd minute header. It didn't matter how it was scored, just that it was scored. The importance of that goal was increased as City fans sat back and watched United, for once, struggle to break a team down and score a a winner.

As we can see in the chart above, 68% of the late goals scored are pretty important goals. They either place the scoring team into a drawing position, a winning position or ensure a 1 goal cushion in that game.

To give this a wider context we should look at the frequency of any goal being scored after the 85th minute.

Late goals are rare. Late goals that may gain or ensure the scoring team a share of the points are even more scarce.

7) Manchester City and late goals So we know about the league rate of late goals, let's now take a look at the City's record of goals after the 85th minute:

City are, clearly, a team that leaves it very late on occasion. Scoring late goals was once a skill that was lauded by the media when Man United were the team scoring those late goals, but now I have looked at City's record of late goals scored it frightens me more than pleases me.

Can that be sustained? Probably not.

8) It was nearly RIP RvP Or so said Alex Ferguson. It was a bit naughty from Ashley Williams, who gained many a new North London admirer, but Ferguson has over egged this one. It could be the United manager has used the ol' deflect the blame away from the players trick!

RvP was labelled a luxury by some media, and a potential deciding factor in the title race by others. United cannot afford him to be harmed or injured. he is by far their most important player in a team which scores a lot but looks awfully fragile without the ball. 12 goals for RvP so far and he has been directly involved on 40.9% of all United's PL goals so far.

9) Fulham's Slide If a team records just 2 wins in it's last 13 games and hasn't won away from home in it's last 8 games the following will happen to it's ppg average:

Fulham are in the midst of a ten game slide that could become a little troubling if it were to extend much further. Up next for Fulham are Southampton at home. It is an important game for Fulham who some expected to be top 8 material. Then Dembele was sold.... 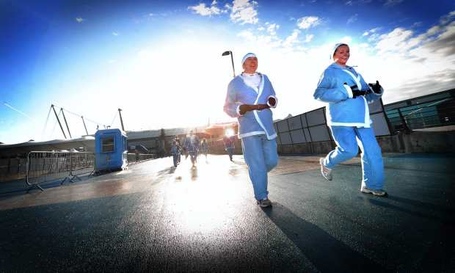