Individual Point Percentage: A look across the Premier League

An introduction to the leagues 'most valuable' players.

Share All sharing options for: Individual Point Percentage: A look across the Premier League

Inspired somewhat by this post over at nhlnumbers.com onn Individual Point Percentae (or IPP), and having taken a look at City's numbers at a couple of different stages this season I thought I'd run the rule over numbers across the Premier League for the 2012/13 season.

We have seen a few posts that show the percentage of a teams goals that an individual player has scored, but is this really accurate and reflect exactly their contribution whilst on the pitch? Working a little different than in hockey, given that in hockey there are continuous rolling lines, I do think there is some value in looking at it in football and is something that will develop as the season progresses (and I will revisit it periodically),

The basic premise is that you take the points total for each player (goals plus assists taken from whoscored.com) and then calculate the percentage this total is against the number of goals the side have scored whilst the individual player has been on the pitch. This way, you discount goals scored when they have been substituted, are sat on the bench or not in the squad for a game, and in theory should provide a more accurate measure of their worth than calculating it against the overall number of goals the team has scored.

The sample size is still very small (time permitting I'll extend this across previous seasons) but there are a couple of indicators even at this relatively early stage of the season. I put in place a cut off point of five points as an 'entry point' and have then narrowed it down to the top 30 players; which, incidentally, captures all players with a number in excess of 30%.

For me, there is no surprise in some of the positions on the list: Luis Suarez, who has dominated Liverpool's scoring charts this season, Demba Ba and Steven Fletcher amongst the top positions and Juan Mata, Kevin Nolan, Shane Long and Michu featuring highly. 'Super subs' Edin Dzeko and Javier Hernandez also rank in the top 15.

After that, Theo Walcott and Dmitar Berbatov may be unexpected ones as both Arsenal and Fulham have scored far more than the number of goals they have been on the pitch for, yet this is precisely the reason for taking a look at this measure and in Walcott's case, perhaps indicates a greater importance to the side than assumed? An extension to this could then be to look at when they get their points and in what game state.

Those perhaps lower on the list than anticipated are Robin van Persie, Jermaine Defoe and Santi Cazorla, whilst Wayne Rooney is outside the top 30 completely.

Given this is a new measure I'm looking at it is difficult to gage what is deemed to be an acceptable % figure. 50% and above 'feels' like an important cut off with anything in excess of 40% the next level, but this is why I am keen to look back over the past few seasons to get a true comparison.

As I say, early days yet but something I'll continue to record during the season. Feel free to post any comments or thoughts below. 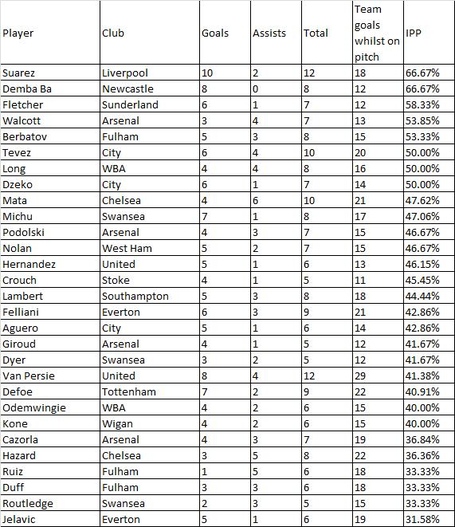