A look at a stat to try and more accurately measure a players influence on team goalscoring.

This post was the first look I took at this measure and as we now get into the season and it begins to take shape I'll post updates up periodically.

The basic premise is that you take the points total for each player (goals plus assists taken from whoscored.com) and then calculate the percentage this total is against the number of goals City have scored whilst the individual player has been on the pitch. This way, you discount goals scored when they have been substituted, are sat on the bench or not in the squad for a game, and in theory should provide a more accurate measure of their worth than calculating it against the overall number of goals the team has scored.

It is no probably no surprise to see Edin Dzeko, Carlos Tevez and Sergio Aguero leading the way in terms of their influence on goals but players who you may expect a greater contribution from; namely Yaya Toure, Samir Nasir and David Silva, have lower than expected numbers. However, given only one assist is credited (as opposed to two in hockey) this may reduce the numbers of midfielders - which the Scoring Chance Index numbers should reflect.

As well as posting updates throughout the season I'll also take a look around the Premier League as a whole to try and get a bigger picture on who the top performers are. 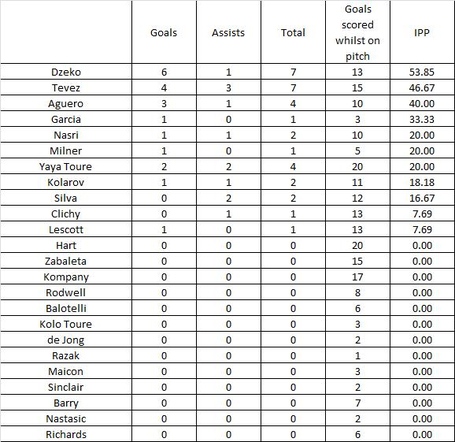