Zone entries is one of the metrics in football that I have really developed an interest in of late and I first published up a study of City's final third entries for the Champions League defeat away to Ajax.

I recorded the return game this past Tuesday and whilst two games is way short of anything remotely resembling a data sample it does provide an interesting comparison putting the games alongside one another as there are some marked differences.

So whilst we know what City did in the final third grab yourself a coffee and take a look into exactly how they did it.

Breakdown of how entered

In total, I recorded City as have 50 final third entries, which is slightly above the figure I have for the game I've looked at so far. This compares with a total of 40 in the first game against Ajax.

The 50 entries were split over the following five categories:

For the purposes of this, a short pass is recorded as being 0-10 yards, a medium pass 11-25 yards and a long pass 26 yards or over. Clearly all measurements were done by the naked eye so could be subject to a degree of error.

There was a big difference here compared to the first game in Amsterdam, which saw 40% of City's entries as long passes. This time though, City stuck to their plan - despite chasing the game - and all apart from six were short or medium passes or dribbles: 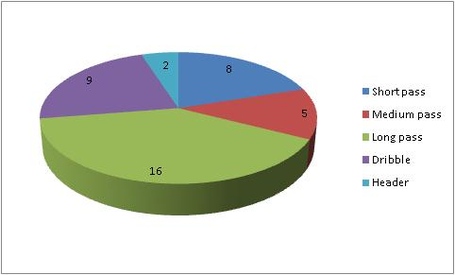 Split between halves and last 30 minutes

The split was very even between the two halves (24-26), possibly a surprise as City were looking to get the win having fallen 2-0 behind but didn't muster a higher proportion of shots after the break. This is also illustrated looking at the final 30 minutes as there was no surge in terms of City pressing hard up the field.

Contrasting with the games in Amsterdam, City actually shied away from resorting to the long ball after the break, utilising this just once compared with 13 times (56.5%) away to Ajax, and the percentage splits showed no real deviation. 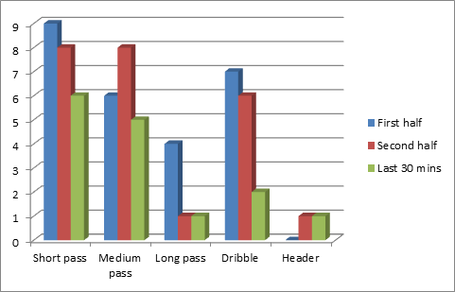 Outcome per how entered

So we know how City entered the final third - and when - during the game, but what were the outcomes? The below table breaks down, for each of the entry categories, exactly what happened; whether City got a shot away or possession was lost for instance.

What is apparent is quite how ‘wasteful' City were with 46% of their entries resulting in a City player being tackled (23). This increases to 64% if you add the outcome of the entry going straight to the opposition (9). This figure of 64% compares against 42.5% in the first game. Of the 50 entries, City managed just six attempts at goal (compared with nine from 40 in the previous game) so for the possession they had in Ajax's zone, they largely failed to convert this into attempts at goal.

Shots per different type of entry

One of the key drivers in zone entries analysis in hockey is to look at that are the drivers for getting shots away. Although the numbers for a single game may not tell us much they do look to be consistent in terms of a general representation of how City entered the final third as a whole, principally from short passes or dribbles:

Type of entry per individual

So who were the players responsible for the final third entries? There were 11 players who got the ball into the final third with their being no surprise that Samir Nasri, Yaya Toure, Carlos Tevez and Sergio Aguero being the leaders - with both Nasri and Yaya Toure scoring far higher than they did in the defeat in Amsterdam. What was interesting to note was that whilst Gael Clichy had six entries, Pablo Zabaleta on the opposite flank only having three.

Type of outcome per individual

The final category tells us the outcome per individual entry; were there any players who were likely to predicate a more successful (i.e. a shot on goal) outcome?

With City ceding possession 64% of the time (the outcome being either tackled or straight to the opposition) it is difficult to read too much into the numbers as to was any player particularly effective when they were responsible for entering the final third. Was was telling though were the low numbers from Nasri and Aguero with Clichy and Balotelli perhaps the most successful.