It was a dull game on Saturday wasn't it? A routine win, a 100 minute long less than impressive performance and just the solitary goal. So I thought I'd take a look at analyzing Man City's pressing game against Swansea.

Why was Man City's pressing game so important against Swansea? Because of how Swansea play.

Swansea finished the season with only 22% of their attacking play taking place in the opposition half, the worst in the league and 31% of their play occurring in their own half, the second highest beaten by Blackburn. These statistics show that possession stats can be deceiving, but rather territorial possession tells a more detailed, accurate story to how a team plays.

This is an excellent post on that very subject.

So, knowing that Swansea tend to pass the ball an unusual amount of times in their own half, Man City and the tactical staff may have decided that the best way to prevent Swansea from using that possession to start attacking sequences was to pressure it at it's source: In Swansea's defensive midfield area.

Man City decided an aggressive pressing game against the cautiously passing Swans would stifle Swansea, thus breaking up their rhythm and enable Man City to turn the ball over in very dangerous positions--30-45 yards from Swansea's own goal. 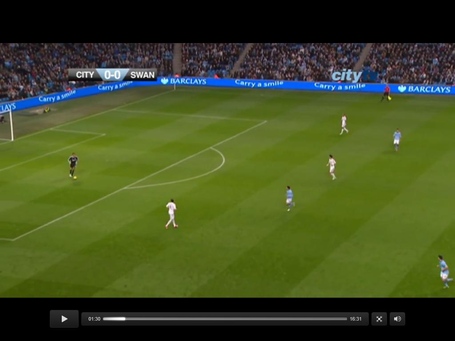 This was only minutes into Saturdays game and Man City are holding two players, their strikers, high up the field as in a standard press. 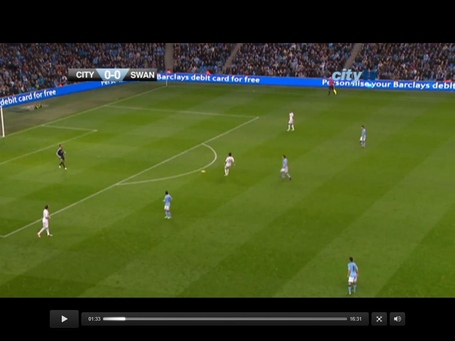 Second later we can see that not only is Nasri in an advanced position in the wide area but Gareth Barry, in this case, has the license to press Swansea's defensive midfielder all the way up to 25 yards from the oppositions goal in attempt to put pressure on the Swansea player.

Why press so aggressively? In order to disrupt Swansea's defensive midfield passing game and to force Vorm, the Swansea keeper, into either playing a risky pass or punting a long, low percentage ball up field. 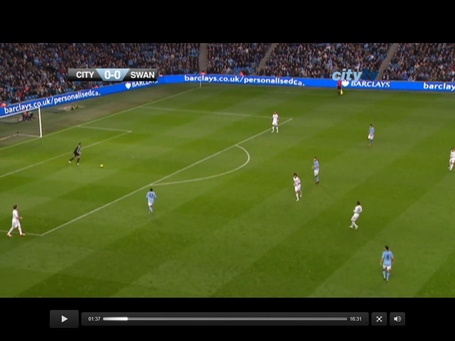 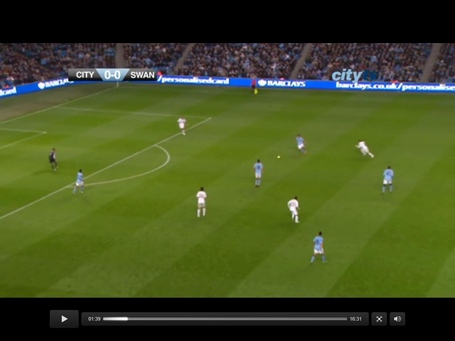 Vorm, probably under specific instruction not to play it long, attempts a short pass and plays it straight to Aguero.

Man City were then in a prime position to generate a very high quality of scoring chance. The move broke down under Tevez's poor control from Aguero's pass. 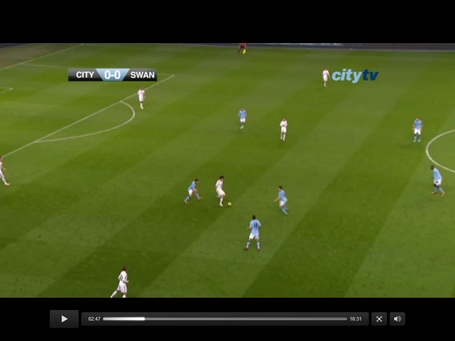 A forward, Barry and the wide player, Nasri, all converge to press Swansea ball carrier in an attempt to create a turnover. 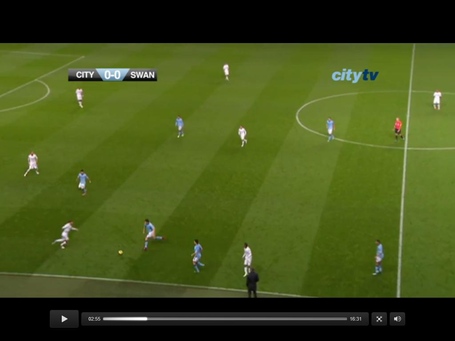 The press also extends to the wide areas. Note six Man City players in a 25 yard square area in attempt to pressurize. The only weakness in the position of Man City's press is Tevez not being closer to the Swansea player in the center of the screen. 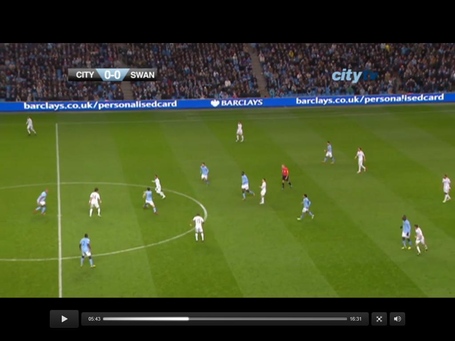 This is a shot of Barry intercepting a Swansea pass after a sequence lasting ten seconds in which Man City blitz pressed. This high tempo press really upset Swansea's rhythm and led to the give away, which then led to Balotelli being clean through on Vorm.

Note Six Man City players who are central and putting the Swansea game under pressure. Man City's wide players have drifted in centrally, and Man City's center back's have pressed up the field all in an attempt to stifle Swansea's possession and create a turnover in that defensive midfield area. Also note Man City's two forwards remaining high up the field so as to be in a position to utilize any turnover which takes place. 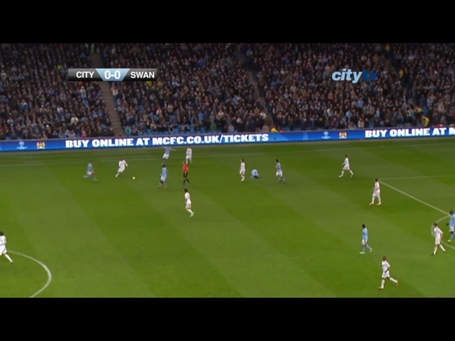 Clichy steps up to pressure Swansea's ball carrier and Man City now have a triangle-a trap-of players around the ball. 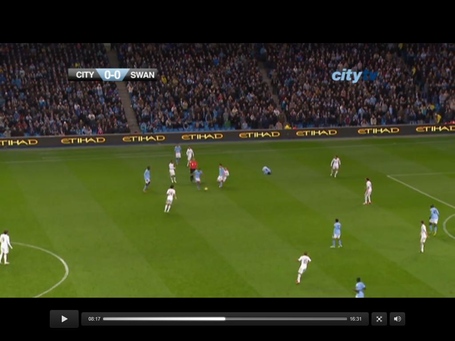 Clichy strips the Swansea player of the ball and drifts inside. 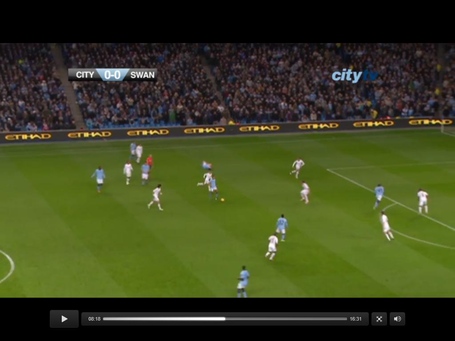 Clichy's winning of that possession duel and consequent 5 yard run has created havoc in Swansea's defensive shape. Havoc is the perfect word, for when a press like Man City employed on Saturday works and the ball is turned over in such close proximity to the oppositions goal, the oppositions shape is affected.

Look at Swansea's back line for example. Two defenders are closing the ball, the two other defenders are dropping off toward their own goal and there exists no solid and straight defensive line in order to cope with Balotelli's run.

With Swansea's two midfielders behind Clichy and the ball, and with Balotelli's run creating space, not to mention the general panic caused from Man City's press successfully creating the turnover, there is ample space and time for Clichy to play the ball to Tevez.

Tevez , with Swansea in the midst of trying to re-organize their defensive shape, has time to control Clichy's pass, steady himself and fire a superb shot past Vorm.

The goal owes an awful lot to Tevez's skill, but without the pressing game, and the ensuing havoc it caused to Swansea's defensive shape and concentration, Tevez would not be afforded the time to execute his highly skilled long distance shot.

The pressing game against Swansea worked in that it created high quality chances, Tevez's in the first half, Balotelli's in the second half, and ultimately Tevez's long range strike. This pressing unsettled Swansea, and although it left gaps at the back for Swansea to exploit- Man City trusted their defensive personnel, Kompany and Nastasic, to thwart any Swansea counter attacks- the high pressure pressing game was an essential tactic against a Swansea side who play a lot of their passes in areas not far from their own goal.

The closer to goal you win back possession from the opposition, the greater the chance of a scoring opportunity arising from it. That is why the best teams play a high tempo pressing game. This is why Man City, with the score at 0-0, pressed so hard against Swansea.