Welcome, It's the review of week 9 in the Premier League. 2000 words and many of them on refereeing decisions. Grab a drink and enjoy.

1) Bale makes hay. The headline demands apologies, it's not classy. But one player who has class in abundance, in terms of ability and judgement, is Gareth Bale. The Tottenham superstar, and yes, he is a superstar, scored in his clubs win at Southampton and declined to celebrate against his first club.

Bale was exactly what Spurs were missing in defeat against Chelsea and scoring against Southampton, whom Spurs hadn't beaten away from home in some time. It would have been a nice moment for the Welshman who left Southampton as a boy for Spurs five years ago now and returned as a man following the birth of his first child to score the games opener.

A credit to Spurs and Southampton both, who nurtured the young Bale (and Walcott and Chamberlain) on the road too stardom.

2) Two Goal Leads. We saw one side, Everton, come back from a 2 goal deficit to draw in the Merseyside derby and Chelsea do the same before succumbing to an offside goal and reduced numbers to eventually be defeated 3-2. two goal leads are often and erroneously referred to as the most dangerous lead in football. This isn't true, it's just commentator nonsense.

How rare is the occasion that a team let's a 2 goal lead slip to draw or lose the game? Rare indeed is the answer. In 2011/12 a 2 goal lead was overturned and stayed overturned at final whistle 13 times in 380 games. 0.034% of the time. Those 13 results contained 2 wins and 11 draws. Everton did something extremely rare on Sunday and Chelsea were very close to equaling or if not bettering Everton's excellent comeback. 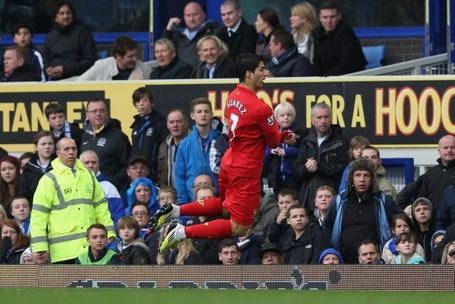 3) Chelsea's regression To The Mean. Chelsea, let's be honest, have been playing well. Very well in fact and have rightly been lauded by the pundits for their very strong start to the 2012/13 PL campaign. Mata has played well, Hazard has shone in bursts and Oscar genuinely looks like a player.

Chelsea have been a touch susceptible at the back at times and have now conceded 2 goals or more in three PL games, Man City and Utd both have been equally susceptible at the back. It all makes for a good title race. But where as Man City and to a lesser extent Man Utd have been relatively low in the PDO stakes, Chelsea had been very high above the mean of 100, and higher still than the best teams of 2011/12.

And do remember just how dominant Man City and Man Utd were over the rest of the league last term, this is reflected in their very,very high pdo scores.

Chelsea, before Sunday's game were even more dominant, and a touch lucky if the excellent James W Grayson is to be believed, and he should be believed.

I have said Chelsea were a football club who might see some of their underlying numbers regress to the mean from their lofty and unsustainable heights.

We know how lucky Sunderland have been in scoring on nearly every shot and and saving nearly all of the shots conceded, it looks like Chelsea are having the same luck. Will this luck run out? Eventually, it will, and we should see a fall in their points accrued as this PDO number comes down

That was from this edition of 10 points. Now, before I am jumped on, I aware that Chelsea were limited to 9 men and this had an effect on the game. My initial point was, as seen above, that Chelsea's pdo was unsustainable and will, given time, regress toward the mean and we should expect to Chelsea to drop some points as that regression take place. That regression doesn''t make them a bad team, it's just what happens eventually.

4) Goal Of The Week. A beauty and it continues the Mata love on these pages. He's close to the Spain starting XI, but not quite there yet. This says more about Spain's depth than any deficiency in Mata's game.

5) Referees And The Impossible Job. I read an interesting piece over the summer on the topic of referees and the Euro 2012. The short of it stated that in a review of refereeing performances, 93% of all decisions were ruled correct upon review. Not a bad number if you ask me, although we don't have the % of penalty decisions and red cards.

Referee's and their assistants were rightly in the spotlight this weekend. The officiating team's decision to disallow Suarez's winner v Everton was derisory in not only it's inaccuracy but in the time it took to come to the erroneous decision to chalk of the legitimate goal. many thought that was as bad as it could get. But, then Mark Clattenburg happened.

I shall not delve too far into an on-going investigation into the racial allegations against him. Let the authorities decide in due time, if Clattenburg is guilty, punish him as is appropriate. If a falsity was alleged against the referee, then punish that also.

Returning to the general point of referee's, we must all say that they have, at times, an impossible job. Criticized from fans, managers and players for making mistakes. Yes, human mistakes that are made honestly. it's called human error and no one is immune from it. Every referee strives to perform to the best of their ability. Some referee's have bad games.

Clattenburg was hammered by Chelsea fans for his performance on Sunday. Some of Chelsea fans complaints have genuine merit. Torres' yellow card, for one, was not a pretty moment but Chelsea fans', rightly frustrated have to remember that the referee made a judgement call, at full speed, with no replay and acted as his extensive referring education taught him. Clattenburg made an honest call, it just happened that he got some of those calls wrong. It happens, and it's annoying. 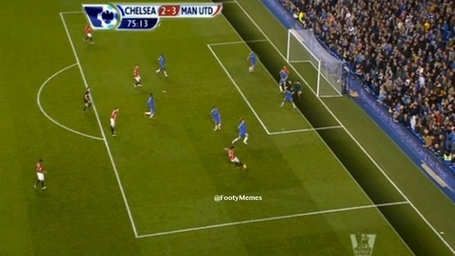 6) Diving And Embellishment. Referee's jobs aren't made any easier by the speed of the modern game, nor easier by the modern players' tendencies to cheat or embellish in order to gain an advantage. From the players perspective it is understandable. The game is awash with so much money, too little honesty and now, such importance in every fixture, that a player feels, at times, that he is within his right to maximize any contact in the penalty area in order to help his team win a penalty and further improve their chances of scoring, and winning the game.

If we take the Chelsea v Man Utd game and analyse the diving/embellishment incidents we can see how far the modern game has moved away from honesty and towards seeking out any little advantage.

Ashley Young. A player who has a reputation of diving was once again involved in incident in a PL game. Young had gained the right side in a breakaway with Ivanovic, the Chelsea man had to act and as he chased Young down, their legs brushed either by coincidence or intent; impossible to tell. Young felt the contact and embellished, not dived. Embellished. Why did he embellish, why to guarantee the referee would give the decision of course. If he stays on his feet, or tries to the referee may never give the foul, Young might score, he might not, so he embellishes. Welcome to the modern game.

Torres. Racing through against two Man Utd defenders, Torres was brushed on his right shin from a dangerous Jonny Evans studs up challenge, felt the contact and went down, as is his right. There was contact, but at full speed and because Torres right leg was fully back in extension due to his stride, it didn't look like a sure fire foul. The referee made a snap call, and surprisingly gave a yellow.

It was a foul, contact was made, but Torres embellished, as Young did, but Torres' embellishment failed as he collapsed whilst full weight was on his left leg. Why is the left leg so important? If Torres' right leg was slightly brushed this should have no effect on his left legs ability to bear his weight and continue his stride, but down Torres went and down whilst standing on the left leg which wasn't touched. It wasn't a dive, it was embellishment and in Torres case, the embellishment was more obvious and this may have contributed to the decision of Clattenburg; he thinks Torres made such a deal of it, instead of continuing his run and stumbling or maybe getting a scoring opportunity, that he decided to issue the yellow. Technically, Clattenburg was wrong.

Diving is easier to eradicate, embellishment is nigh impossible to detect and thus confuses referees and angers fans. If anyone has genuine complaints about Torres' yellow, remember that if Clattenburg had followed the letter of the law, Torres would have gone for a dangerous and high tackle for which he was initially booked and Luiz would have been guilty of a handball in the box. That is not to dilute Chelsea fans' anger, which is understandable, but I'm not sure which of these two scenario's is worse: 9 men late on, or ten men in the first half and a penalty against in the first half.

The game was a mess, United's winner shouldn't have stood, despite the linesman possibly being unsighted by Luiz and Cech for Hernandez's winner. A mess of bad and contentious decisions. 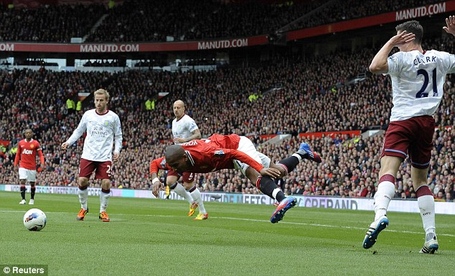 7) Cisse Finally Scores! It's been a long time coming for the striker who many thought was the real deal, I even had discussion on twitter with a Newcastle fan who thought his scoring %, higher than RvP and Aguero, was higher because he maximized and applied his talent better than the aforementioned PL superstars.

There was no mention of an unsustainable scoring%.

Cisse has a high career scoring % but last seasons 61.3% was crazy high, it always had to regress to the mean. And this season that regression came early and hard.

After 13 goals on 21 shots on target last term, Cisse has in 2012/13, in 7 starts recorded 1 goal on 5 shots on target for a 20% scoring %. The scoring % has regressed, naturally, but Cisse's biggest problem is his inability to get shots on target this term. Newcastle fans may be able to tell us more about his low shot totals which are causing his low goal totals?

Demba Ba has started 8 games in 2012/13, scoring 7 goals on 15 shots on target. That is ten more than Cisse has managed. Ba's scoring % looks high, also. But for now it is hard to criticize the player, for Ba is applying the maxim- if you don't shoot, you wont score. 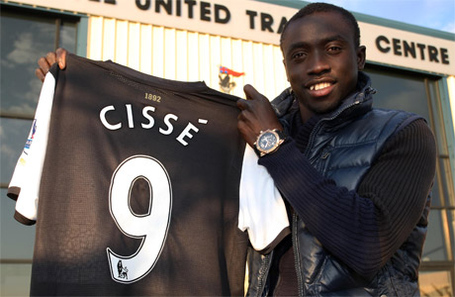 This is the percentage of game time in which the team has spent in a losing position.

There are some of the PL better outfits in the top half of this table, plus two teams, Stoke and Sunderland, who are incredibly hard to beat and score against.

The bottom three are to be expected but Swansea's poor away form is dragging them to the bottom of this table.

9)Aston Villa. Just 6 points from 9 games is a poor return from what was supposed to be a bright new dawn under the new management of Paul Lambert. It has, so far, been anything but a bright start with just one win in 9 games along with 5 losses. Villa are neither winning nor hard to beat.

Lambert was seen as a breath of fresh air for the club and was welcomed with open arms by the Villa faithful who suffered through the turgid football produced by old boss Alex McCleish, and Lambert should turn things around for Villa and ensure safety. It will also be valuable learning experience for a young squad.

McCleish for all his faults and un-watchable football had Villa on 11 points after 9 games. Food for thought.

10) Dive of the week. On a lighter note, let's watch Suarez employ some genuine Scouse wit with this celebration. Not since Fowler's famed smack 'ed response to scoring a goal has the fine art of celebration brushed such exquisite heights.