To give his full name, Aitor 'Txiki' Begiristain Mújica, has finally been appointed as Man City's new sporting director. Txiki replaces the much maligned Brian Marwood who sidesteps to become the new director of the academy. This was an appointment I predicted on August 20th in this Ferran Soriano profile.

A sporting director at a football club? We have come a long way since fans used to bristle at that title. The first continental style sporting directors, think of David Pleat and Frank Arneson, were much ridiculed figures. Ridicule from fans who neither understood nor cared for the inner workings of their job and feared by the managers who worked under them.

But we are in a different age now. A new age of big structure, big football. A sporting director is deemed vital at the larger clubs as a method to ensure continuity in the event of managerial upheaval. The house doesn't collapse if the manager gets the tap on the shoulder.

Naturally this isn't the only function of the sporting director. Think of responsibilities for scouting networks, final say on player arrivals and departures and the fee's secured or paid for said players. 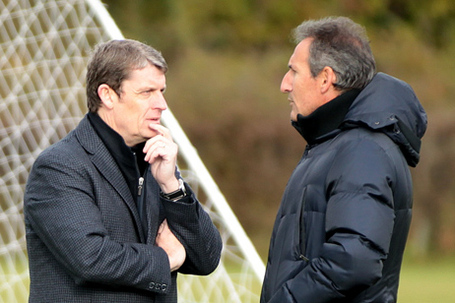 The old and the new.

So, who is our new sporting director of unpronounceable name?

Firstly, it's pronounced (I think) Bay-gear-e-stein.

Born in the Basque country, Txiki was a left winger, namely for Real Sociedad and Barcelona. Upon his retirement, Txiki worked briefly as a TV pundit before being appointed as sporting director at Barcelona, a post he held from 2003-2010. He worked extensively with Ferran Soriano during this time, thus it was no surprise to hear his name linked with the sporting director job as soon as Ferran was appointed as City's new CEO.

"I am very pleased indeed to have been offered such an exciting opportunity,"

"The progress and on field achievements at Manchester City are plain for all to see and I am honoured to have been asked to contribute to its future success.

"I am very much looking forward to working with Brian Marwood, Roberto Mancini and Ferran Soriano in continuing to build a football team and philosophy which will serve Manchester City well in the near and long term future."

Man City's new Catalan/Barca group is expected to be filled out with Bojan Krkic's father, who was a scout for Barcelona, and other technical and scouting appointments from the old team who worked under Soriano and Berigistain.

I wonder if those minor appointments will be the final ex-Barca employee to join City within the next 9 months?