Dzeko's winner in injury time was not only a vital goal which capped off a tremendous performance; it was also a masterclass of counter-attacking intent and execution.

The game winning goal from Dzeko was a beauty. Counter attacking football at top speed, executed by top class players with the confidence and ability to make it look easy. 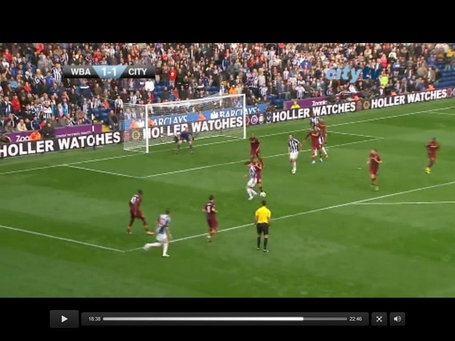 A West Brom short corner was mis-controlled and a 50/50 ensued. kolarov was strong in the tackle (seen above) and won the ball. 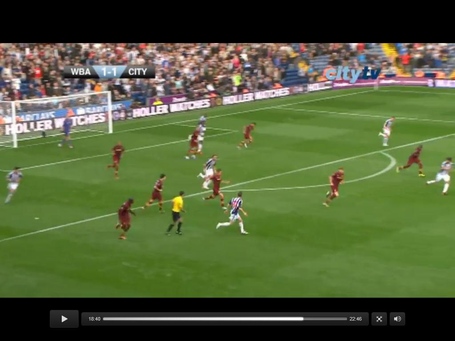 Kolarov, having won the ball, breaks out of his own 18 yard box and looks to spring a counter attack.

If we take Kolarov's position as the starting point we see West Brom have 5 players still committed to the attack (behind the ball) and 5 players in defense. Man City have Toure, Dzeko and Richards streaking forward. Aguero is the focal point of the attack lurking on the half way line out of shot. 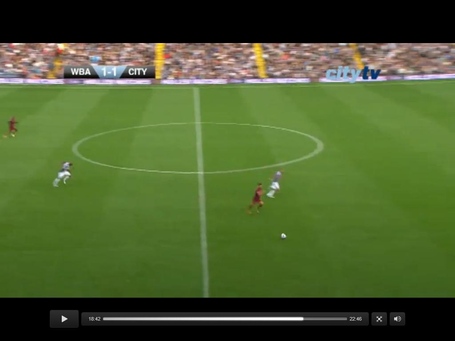 Kolarov's long pass into the right hand channel not only finds Aguero but finds him in-stride and this allows the fast momentum of the attack to continue. 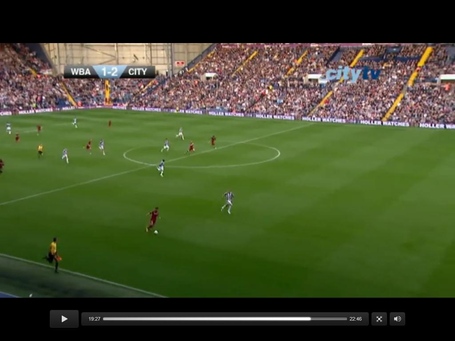 From a different camera angle we can fully appreciate the scope of the unfolding rapier like counter attack.

Aguero, having just taken his first touch, will steady himself and analyzes his options in a split second. This is how a top level footballer's brain works. An almost instantaneous mental calculation of his options and their likelihood of success takes place, and for a top player like Aguero that split second calculation is usually right.

Man City have two players streaking forward on the half way line. The west Brom defender nearest Aguero is in a good position but Mulumbu (West Brom player second closest to Aguero) is in a bad position. He has to trust his team-mate to contain Aguero to an extent, so as to allow himself to be able to drift in field to be in a position to cut out any through ball that may be played cross field towards Man City's runners.

Man City's counter attacking shape is perfect. A wide player (Aguero) who can execute the pass and two willing runners in the center of the field who are busting a gut, running through the pain of a full 90 minutes in Richards case, knowing that if the pass is good, the chance to score will be a very high quality one. Winning the game is what drives those legs forward. 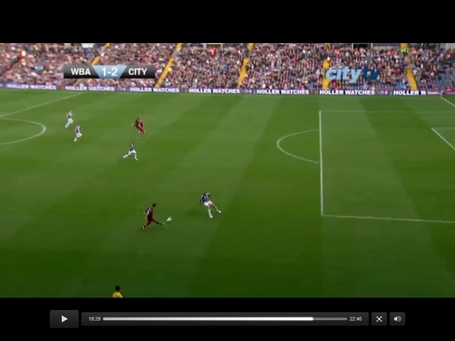 Aguero, choosing the right option, passes the ball hard and perfectly weighted toward the edge of the box. That large purple blur in the top center of the screen is not Carlos Tevez cerca April 2012 but in fact two Man City players. The nearest to Aguero is Edin Dzeko. 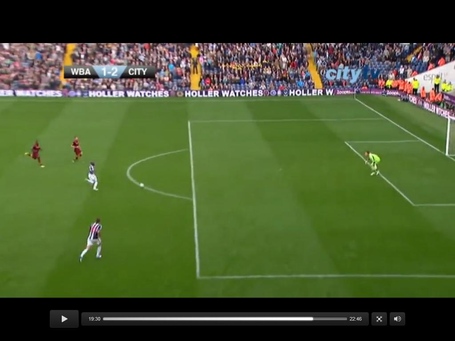 Aguero's ball was perfect, it had just too much pace on it to allow the West Brom defender, who wan't central enough, to intercept it.

Richards rightly eases up to allow a professional to receive the pass. 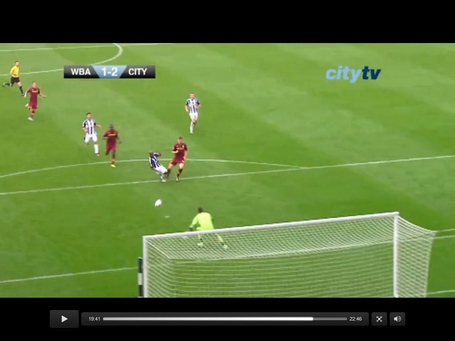 The pass evades the desperate lunge of the defender and allows Dzeko, clearly confident in hitting it first time, to guide it past the keeper. 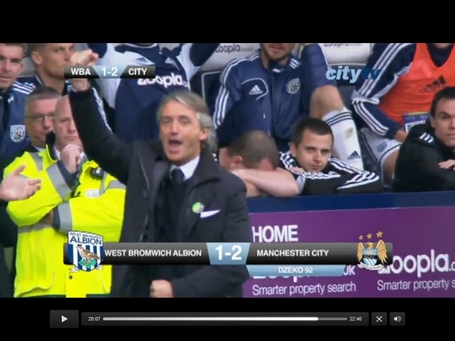 The manager is pleased, the West Brom kit man less so. 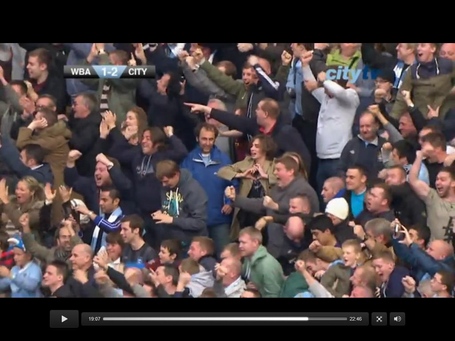 The lady in the center of the screen shot looks happy. She loves Dzeko. If you recognize yourself, give yourself a shout out in the comments section.

The ladies love Edin Dzeko and if he continues to score such important goals for Man City, as a sub or starter, there will be a lot more love for a player who, at times, has taken some stick from the City fans.

The goal to win this game was a textbook counter attack. A 50/50 was won by a City player in his own box, one pass later Aguero was streaking down the wing with runners to center. Those City runners had taken up excellent positions in peeling off the covering defender and once the square ball from Aguero was good, Dzeko had the easy chance to score.

The commitment shone through in the initial tackle, the willingness was in the runners desire to support the attack and the skill was in the pass from Aguero and the finish from Dzeko.

10 seconds from Kolarov's tackle to the ball crossing the line.