West Brom 1-2 City: A breakdown of the goals

Share All sharing options for: West Brom 1-2 City: A breakdown of the goals

A lot of the blame for Milner being forced into a position in which he was the last man and thus committing the foul was pinned on Vincent Kompany stepping up into midfield. Blame for the teams positional shape which led to Kompany stepping into midfield is shared amongst a few of Man City's players. 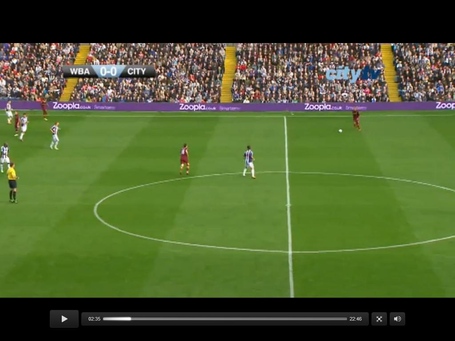 The ball has been passed back to Kompany from the right wing area. Man City's full backs (Richards is in shot) are high up the pitch leaving just Kompany and Lescott inside City's half. Barry is the sole midfielder in shot. 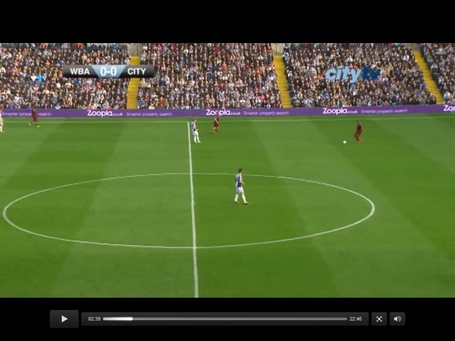 Kompany has passed to Barry who, heading over toward the right back spot, passes back to Kompany. Vincent normally would have a few options here:

1) Pass to Barry's midfield partner (Milner or Toure) who should of dropped deep to provide an outlet.

2) Pass sideways to Lescott. This may have been a risky pass considering West Brom have two players pressing high.

3) Long ball forward or long pass back to the keeper. Both of these pass options would run the likely risk of losing possession.

The manager would stress that a part of the tactical game plan is not to punt up field from the half way line under minimal pressure.

Option 1 was unavailable due to Barry drifting out of position to the right hand side, probably and rightly believing that his midfield partner would provide the alternative outlet for Kompany to pass to. No midfield partner, Milner in this case, dropped deep enough, quickly enough, to be that outlet. Option 3 is a tactical last resort under blitz-style pressure, so this rightly didn't happen.

So that leaves option 2 as the logical and correct choice for Kompany. For some reason Vincent either didn't trust Lescott's ability to cope with a difficult pass under pressure or didn't think the pass was on. We know that Lescott has been dropped at times this season for individual mistakes but also due to Lescott's replacement, Nastasic, is far more comfortable on the ball in pressure situations.

Did Kompany not trust Lescott to cope with handling a pass under a strong West Brom press, or did Kompany just not think in deciding to take responsibility for the situation and attempt to dribble his way through West Brom's press? 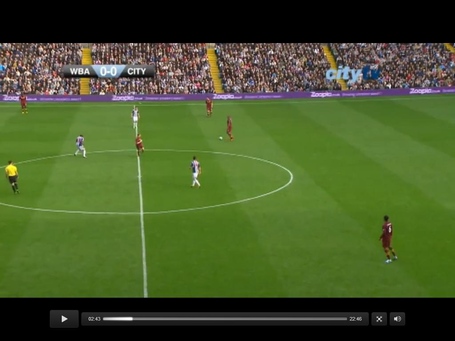 Milner is seen here having arrived too late (and with a marker) to be a viable pass option and has thus rolled away toward the center spot in trying to drag his marker away and create a passing lane in which Kompany could find a Man City team-mate.

Barry could be easily closed down if the ball is passed to him. The passing lanes to Richards at right back and Lescott could be easily cut by the alert West Brom forwards who are pressing. Kompany should now abandon the tactical direction which states that the ball shouldn't be lumped forward, and just lump it anyhow. Or pass back to Hart. 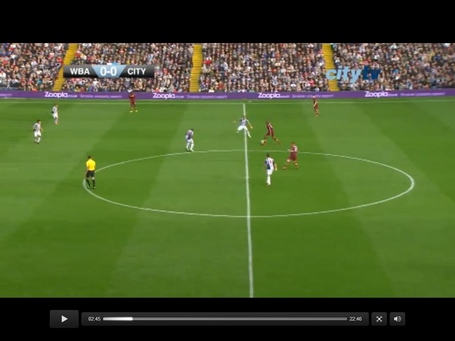 Kompany ignores the emergency back-pass or hoof forward and manfully takes responsibility for Man City keeping possession. His major error was not in believing that a dribble through two West Brom forwards was his best method of keeping said possession of the ball.

The large space around where the referee is placed is an area where it reasonably expected that a Toure or Nasri, sensing the potential danger, may have taken up position thus making themselves available for the defensive outlet pass. Neither player sensed the danger, no further was on it's way.

Kompany, having made the decision to get his head down, recall his midfield playing days by trying to dribble out of trouble, is now on his own in solving this possession problem. 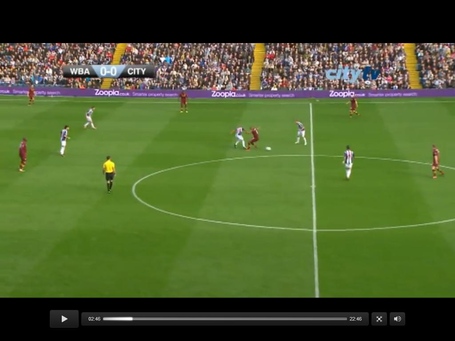 Kompany fails with the high-risk dribble and is tackled.

Milner, alerted to the risk kompany has taken, has sensibly filled in to cover his captains position. 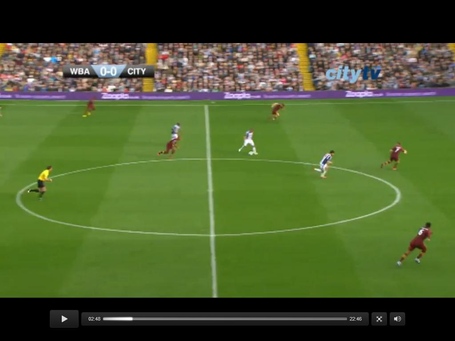 Milner, whilst acting alertly in filling in for Kompany, shows us why he isn't a center half with his less than defender-like positioning. The West Brom player has released the pass toward the feet of the streaking Shane Long.

The pass shouldn't normally present a problem to the quick Jim Milner, but the City player is a yard or two too far toward the far touchline. Why is that yard or two so important? Firstly, if Milner is a two yards closer to the middle of the pitch he cuts out the pass easily. Secondly,It matters also that Milner's center half partner, Lescott, is too far toward the near touchline and this leaves a huge gap into which an excellently weighted pass can be placed between the two City defenders in shot. 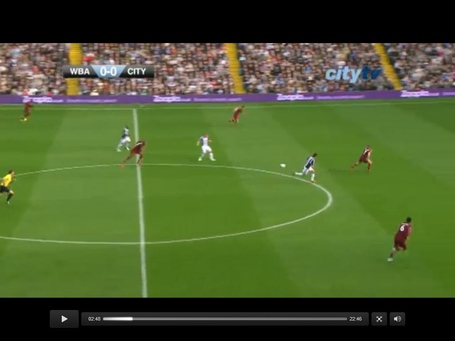 ahead and beat Milner to the ball.