For those of you with excellent eyesight, you can see a full correct score list on this screen shot, too. 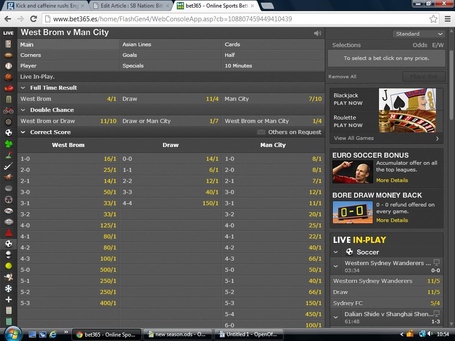 TV: Desperately search for a stream (and share it in the comments section if you have been lucky enough to find one, please) 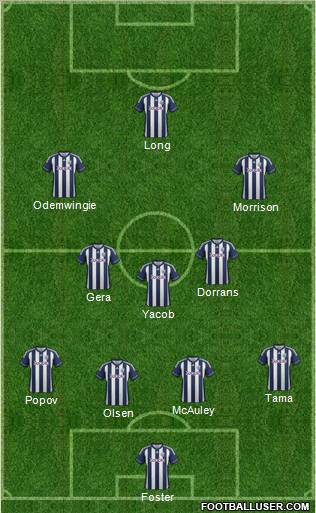 This is West Brom's expected line-up. I have to say expected as many moons have passed since a match preview, whether it featured on a blog, new media or a newspaper, has correctly guessed the starting XI.

This is West Brom's projected line-up. The Baggies are expected to play a 4-2-3-1/4-3-3 formation that have been using at home to such good effect.

One To Watch: Shane Long. The Irishman is West Brom's top scorer this term with 3 goals. 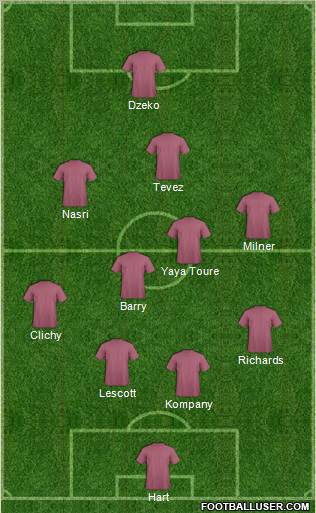 This is my prediction of Manchester City's expected line-up.

I think we are now past the point of of posting about static 4-4-2 formations as they just don't exist anymore. Formations are fluid, Midfielders and wingers don't play as deep as each other in the modern game, full backs don't stay back.

So I had a play around with the formation and posted the above expected formation. Kompany and Barry drop a touch deeper from their respective positions n order to distribute the ball and start possessions. Richards and Clichy are pushed on as is the tactical set-up of Mancini's City team. Toure more advanced than Barry, Nasri more advanced and central than Milner with Tevez roaming as he usually does.

Dzeko to start over Aguero is just a hunch, especially with the Ajax game next week.

One To Watch: Nasri. In Silva's absence, Samir will be expected to pull some of the creative strings and put in a strong, involved performance today.

Man City's away win at Fulham. Mute the volume immediately, otherwise you will experience what it sounds like to hear a robot commentate on a football game.

West Brom have a very good home record in 2012/13, they are out-shooting the opposition and outscoring them whilst having the slimmer share of possession. Everton and Liverpool have both suffered defeat at the Hawthorns in 2012/13.

Man City are the best team in the division in terms of shots on target for and against but really need to start imposing themselves on fixtures, converting their scoring chances into goals and employing greater concentration in the defensive areas.

I could really see a draw happening in this fixture, but I have a hunch Man City will score the first goal and go on to edge the game.