A look at a stat to try and more accurately measure a players influence on team goalscoring.

Inspired somewhat by this post over at nhlnumbers.com, I thought I'd run the rule over City's numbers on the fledgling 2012/13 season.

We have seen a few posts that show the percentage of a teams goals that an individual player has scored, but is this really accurate and reflect exactly their contribution whilst on the pitch? Working a little different than in hockey, given that in hockey there are continuous rolling lines, I do think there is some value in looking at it in football and it something that will develop as the season progresses (and I will revisit it periodically) and can be looked at in conjunction with the scoring chance numbers.

I'd also like to work on a defensive measure as well to identify the defenders who are providing most value.

The basic premise is that you take the points total for each player (goals plus assists taken from whoscored.com) and then calculate the percentage this total is against the number of goals City have scored whilst the individual player has been on the pitch. This way, you discount goals scored when they have been substituted, are sat on the bench or not in the squad for a game, and in theory should provide a more accurate measure of their worth than calculating it against the overall number of goals the team has scored.

Given the sample size is still very small (resulting in Javi Garcia's high number) it is clear that over the opening weeks of the season it is Carlos Tevez and Edin Dzeko whose contribution is proving most valuable with Samir Nasri close behind.

As I say, early days yet but something I'll continue to record during the season. Feel free to post any comments or thoughts below. 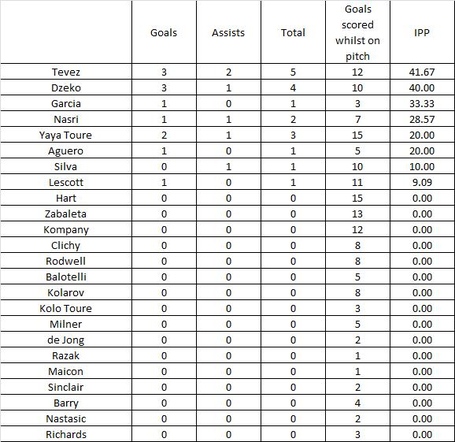