We are once again in the midst of a seemingly endless International break, so I thought it timely to briefly reflect on the scoring chance data I have been collating this season in addition to a look at some of Opta's categories.

Share All sharing options for: Scoring Chances and Creativity

For those who have not come across it so far, this introductory post provides the background to how the data is collected and the reasons I started collecting it.

The below table (clic

k to enlarge) shows the cumulative totals for the City squad for the 2012/13 Premier League season to date.

It is no surprise that the names at the top are those of the more attacking players in the squad given that a) City create more scoring chances than they concede and b) from doing this analysis it is clear that there is more scope for an attacking scoring chance to involve more players than the defensive chances.

No surprise to see either Carlos Tevez or Yaya Toure in the top positions given their importance and involvement in the attacking game. Two names who may be a surprise to see so high up though are David Silva and Edin Dzeko, the former who was believed to have had a poor start to the season and the latter who is often considered to be too on the periphery of games. Sergio Aguero's injury-hit start to the season seems him only on the edges of the front-runners but expect him to continue to climb.

There are two main ‘culprits' in terms of defensive errors that lead to scoring chanches: Aleksandar Kolarov and Joleon Lescott. Kolarov is perhaps not surprising given the perception of him as sometimes lacking defensively (but outweighed by his offensive contribution) but the form of Lescott in conceding five errors that have led directly to scoring chances; form that has seen him lose his place in the starting line up after a very impressive 2011/12 season.

We can also see - Joe Hart aside - that City have not ‘defended' many scoring chances so far. This, I feel is two-fold, firstly a lack of scoring chances being conceded and also when they are conceding scoring chances they are of a ‘high quality', meaning that they likely result in an unimpeded shot at goal.

This top ten of names lists the most productive per time spent on the pitch and does see both Silva, Tevez and Yaya Toure in particular drop down in comparison to Dzeko, Aguero and Samir Nasri. A name to note is Mario Balotelli. For all his stuttering start to the campaign his number is the lowest (by some distance) to the other strikers on the chart.

Note the outlier that is Micah Richards given his offensive explosion against Sunderland on his first start that slightly skews the standings.

A variation on the above table is to now show the contribution per 100 touches. Unfortunately the available stats do not disseminate the final third touches so the number of touches is overall (regardless of where on the pitch they occur) and would likely see some change to the results.

Both Dzeko and Aguero are far more involved per 100 touches than their main rivals. Tevez's numbers drop a little due to the different role he plays (dropping deeper and wider), as do Yaya Toure's who routinely leads City in terms of touches per game. Note too the difference between Nasri (4.35) and Silva (3.85).

Again, Richards is atop the table but this will not last too long.

I have also recorded the scoring chance totals at differing game states.

We can see that Dzeko and Yaya Toure lead in terms of involvement when the game is level whereas Silva and Tevez are most effective when City are either leading or trailing by one goal. Interestingly, for all the goals that City's game have seen, there was only the Sunderland game where City either led or trailed by more than one goal, with just one scoring chance at this particular game state.

Given the data in the scoring chances is self-collected I thought I'd finish with a look at a couple of Opta defined and measured categories: shots, shots on target and chances created. Again, I have used the ‘per 90 minutes' and ‘per 100 touches' as the base. 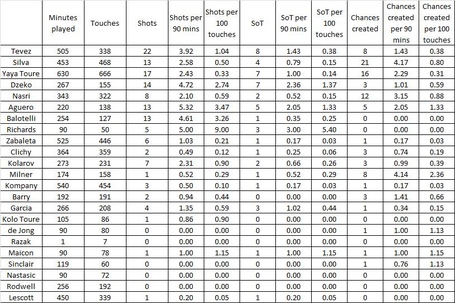 The table is placed in the order of the scoring chance leaders by way of comparison.

Looking at the shots on targets we can see a huge discrepancy with Balotelli's numbers. The Italian has had just one shot on target this season meaning his Shots on Target numbers fall off the radar with Dzeko, Aguero and Tevez all leading.

In terms of chances created, perhaps the closest to my scoring chance metric, Silva, Yaya Toure and Nasri are the top three with Silva having a healthy lead. This also translates into the chances created per 90 minutes but all three interestingly have a high number of touches in order to create these chances with James Milner (albeit with lower touch numbers) topping this category with Aguero the nearest to him.