Welcome to the much delayed Ten Points from around the Premier League in Week 7. This article was misplaced and lost amongst all those other digital articles and pieces of paper on that dusty virtual editors desk. As it is, it will be gleefully published on this Saturday morning as welcome relief for those of you, who like me, may well detest International qualifiers and friendlies as an obstruction in the way of the continuation of the PL season. So here goes, expect some Balotelli, Spurs and some of Shearer's 'Chelsea are just like Barcelona'

1. West Brom Who are, of course, Man City's next away fixture, won comfortably at Home to QPR 3-2. It was a strong performance from the Baggies that shredded open QPR's defence time and again. They appear strong at home, but will face a challenge in hosting Man Ciy on Oct 20th.

West Brom, while not quite lambs to the slaughter away from home (2 points from 9), stand at 4 wins from 4 at home. The Baggies, who under the new management of Steve Clarke, have turned their home ground into something of a fortress, beating Liverpool and Everton comfortably and dispatching Reading and QPR by a narrower margin. 12 points from 12.

West Brom has scored the first goal of the game on every occasion at home this season in the PL, they boast one of the better Shot On Target Ratio's in the league with 75.2% and a home PDO of 101.35 (which means that West Brom haven't been overly lucky). They may very well be the real deal at home even though it is very early days.

2. Man City A strong performance at home from the Blues winning 3-0, as expected. Sunderland are a poor outfit as talked about last week here on these very site. The early goal killed the game, Kolarov was everything he was advertised to be when he signed for the club. City looked like their old selves against that set of lambs and anyone who did not bet on Man City to win by a score to nil really missed out on a great value bet.

3.Chelsea Recorded another home victory over Norwich, which now makes it 6 wins from 7 games, and an impressive 19 from 21 points gained. they are deservedly at the top of the PL table but there are a few red flags for me. One is their PDO, which is a mixture of luck and skill and is likely to regress toward the mean of 100 given enough time.

This is Chelsea's PDO:

123.2 is 2nd in the PL only to Sunderland's extortionate 123.6 number. We know how lucky Sunderland have been in scoring on nearly every shot and and saving nearly all of the shots conceded, it looks like Chelsea are having the same luck. Will this luck run out? Eventually, it will, and we should see a fall in their points accrued as this PDO number comes down. We also have to think about Chelsea's quality of opposition, or lack thereof. Games against reading, Newcastle, Stoke, Norwich, Wigan, QPR and Arsenal should yield a fair high number of points. Chelsea thus far have done what would have been expected of them; beat the weaker teams in the division- although, I will give them credit for the excellent Arsenal away win.

4. Chelsea Are The PL's Answer To Barcelona So says Alan Shearer, in what most would likely think was a staggering statement of hyperbole. The comment was made before an audience of millions on the BBC's Match of the day programme. Shearer tried to qualify his statement by saying that the tactical set-up of Chelsea was similar to Barcelona's in the manner in which they move the ball and players interchanging and their positioning.

It shocked me at the time, and shocks me still now. Chelsea are a good team who have faced a weak set of opposition this term and should be expected to look good against this weak opposition. But to look like Barcelona? Not for me, not even close. I have watched every Barcelona fixture for two years now, it's an unfortunate side effect of living in Barcelona that there is no escaping their games, they are on every TV in every bar, cafe or restaurant. It's a culture, a way of life and inescapable.

There is a beauty and fluidity to Barcelona football club, a speed of foot and thought that is un-matched in all of football. They play without a center forward and crush teams with the weight of their possession in the oppositions half. The tactical awareness of their players and their ability to apply pressure is what sets them apart. Chelsea lack all these qualities in the abundance by which Barcelona possess them. Barcelona set up to pin the opposition in the final third, play with two defenders at times and wear down the opposition by applying insufferable pressure around the opposition box. The speed and and number of passes, the angles of play and movement of Barca players confuse the opposition and ultimately it is this that results in goals and wins for Barcelona.

Does any of the above descriptions of Barcelona sound like Chelsea? No.

5.QPR Oh dear. Where to start? Disjointed in attack, confused in midfield and shambolic at the back. QPR are in a bad place at the moment and the 3-2 defeat at West Brom did more to flatter the vanquished. QPR are a mix and match side, plodders and journeymen like Clint Hill and Anton Ferdinand are playing alongside quality performers like Granero, Julio Cesar and Faurlin and there seems to be a disconnect between these two groups of players, an unfamiliarity that is costing them points. I think Mark Hughes will get it right and that they will escape relegation with ease. But the slide needs to halt, a slightly less open style of play may help.

6. Di Santo And Kone. Wigan's budget strike force is looking anything but budget level at the moment. Both strikers have scored three goals a piece for Wigan despite the club suffering it's worst start ever to a Premier League season. The striking pair looked a dangerous handful against Everton during the 2-2 draw and it is this striking pair which will, in all likelihood, save Wigan from the drop with their goals and excellent hold up play and interchanging passing and movement.

If Di Santo continues on this upward curve of development it wont be too long before a bigger PL fish pays a decent transfer fee for his services. 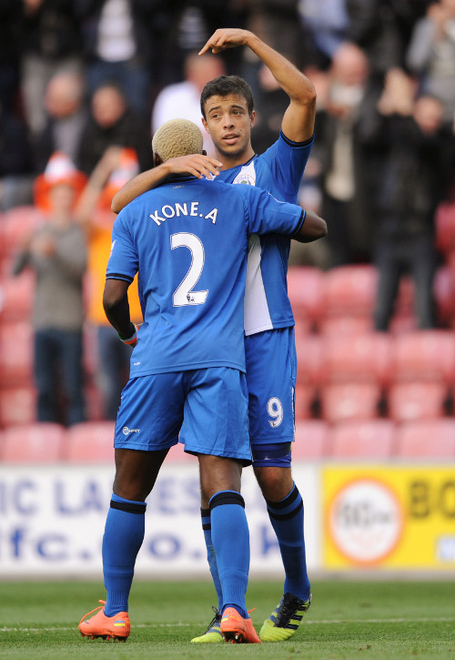 7. Balotelli. Much has been written about our Mario since his display, or lack of, against Sunderland at home. This attack on Balotelli by Simon Curtis seems to sum up the prevailing winds of attitude change to the 22 year old. Many fans were unhappy with the players decision to walk straight down the tunnel following his substitution in the 56th minute, and rightly so. It's always nice to see a player, although disappointed at being subbed, head for the bench and to stew with his team-mates rather than in the changing room.

But, was this really such a great crime that it warranted twitter polls to discover fan opinion on his potential sale, or to write an article which questions his future at the club. Was Balotelli walking down the tunnel really the straw that broke the camels back, was it the 1000th cut? No, we need to take a step back and say that this is a slowly maturing young man who may be worth the trouble and whose behaviour can not get worse than it has already been.

Balotelli's nadir, for me, was away at Arsenal last year where an inept performance led to frustration and led to a stupid red card, and not for the first time. His attitude and how I felt about it could never plumb those depths again, the worst of Mario's bad, mad behaviour is surely over, the dark wave of trouble is rolling back and leaving a high water mark for all to see just how bad he once was. If the recent blogs and articles asking if Mario's time was up were for another stupid, stupid red card which costs his team the game and the player another 3 game ban I would understand. As it is the player had a below average game and walked down the tunnel. Hardly time for the for sale signs.

8. Balotelli's 2012/13 PL numbers. Now, if we are talking of potentially cutting losses, saving face and making some money on the players sale then let's talk about performance rather than a less than perfect attitude. No 22 year old is imperfect and growing pains are inevitable and bearable, but sub par performance is more harmful than a tunnel walk.

Note the blank spaces where no event has taken place. Balotelli has played 40.4 percent of Man City's total minutes this season and note Aguero was unavailable for nigh on 4 games. Balotelli's numbers are apalling, 13 shots and just 1 on target, no assists and no goals. It is strange how Balotelli has been trusted more to play away from home than at The Etihad.

These are by far the worst striking numbers at the club and probably the most individually disappointing numbers of any any player in 2012/13. If Mario continues in such poor form, he won't need minor indiscretions blown up into scandals to hasten his exit from the club, his poor performance alone may well do it.

9. Spurs and the media. Spurs won comfortably 2-0 against Aston Villa at the weekend and that now makes 4 wins on the spin and is good for joint 4th place with Everton. Villa-Boas was a man with seemingly few friends in the media and was always going to face a difficult task in winning them over once again, a loss and two draws in the first 3 games didn't help. The media, whether doing their job or otherwise, jumped on this slow start and began printing articles to the tune of 'Villa-Boas under pressure', 'Villa-Boas faces 3 games to save his job' and thus his career in all likelihood.

The numbers behind Spurs' slow start told a different story, they were fairly good in those first 3 games although a Spurs fan may be able to colour the numbers in with a touch more first hand evidence. Spurs, in those first 3 games, outshot the opposition, had a greater share of possession, had more shots on target than the opposition and but for conceding 3 late goals after the 80th minute may well have started with 7 points from 9 instead of 2 points from 9. And that would of been good for joint top.

Here's how Spurs' numbers have moved forward this season

PDO(save%+scoring%) has steadily increased from it's un-naturally low start or 58.4 and has moved toward the mean of 100 and has now surpassed it.

Shots on target ratio is at 60% which is 10% above the average and this indicates a team who is gaining the greater share of shots in every game. This stat has been pretty stable from the first (bad) 3 games and the next (good) 4 games. Possession has been stable, too.

So, the only stat which has got better from the poor first 3 games is PDO and this is more about Spurs' bad luck of the first 3 games coming to an end.

10. Quality of opposition. Which team has had the most difficult PL fixture set this year? Remember this, well let's play it again for the 2012/13 season

So by eye, the teams with the most difficult opposition difficulty rating have accrued the least points. Harder the fixtures the harder it is to gain points.

West Brom with the easiest schedule and Villa with the hardest. Obviously these numbers will change and it will be instructive to look at this particular metric at the mid point of the season.