10 Points: Steven Fletcher, Save %, Dzeko and around the Premier League

A round-up of week 6 in the Premier League

Share All sharing options for: 10 Points: Steven Fletcher, Save %, Dzeko and around the Premier League

1. Man City's Slight Return To Form. It has been a while coming, but there were signs on Saturday against Fulham that the real, true Man City were beginning to re-surface. The passing was crisp, the possession % was a very high 71% and City looked very good in certain spells. But, there was no clean sheet, we struggled to create chances yet again and yet for Edin Dzeko's nice spin and shot move we would be talking of a crisis at man City.

The style, control and cutting edge will come, in time, it's important to get the results on the board for now.

2. Spurs' Pace. Spurs have quite the team on paper and if Vila-Boas can manage to put it all together they may well be a force given some time. In Saturday evening it was the pace of Bale, Lennon and firstly Vertoghnen which was the undoing of United. Time and again the injury hit backline of Man United looked very vulnerable.

It was a fine win for Spurs and the potential is there to fulfill my prediction of a 4th placed finish for Spurs. 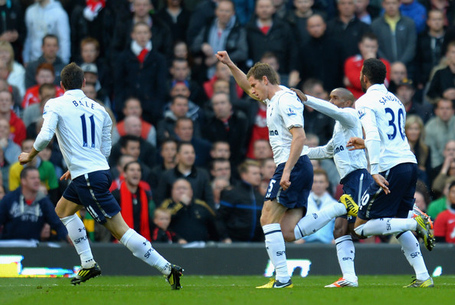 3. United's Injuries. United were undone by Spurs on Saturday and one of the contributing factors, along with a poor team selection by Ferguson, was the injuries United have suffered. Key losses to Vidic and Jones and Smalling mean the defense is shorn of a little athleticism and it showed in spells on Saturday. United are truly being hit by the injury bug at the moment an it may begin to affect their performances.

4. Dzeko. Another sub appearance another goal. The Bosnian is much maligned on fan site's but he has definite worth and is unlike any other striker Man City have on the books. A vital contribution on Saturday.

5. Steven Fletcher. 5 shots on target this season has resulted in 5 goals. It's an incredible scoring rate for a player who just seems to find himself in the lucky areas. His scoring rate probably wont continue but Sunderland fans should enjoy it while they can.

Sunderland have registered 7 shots on target through 5 games this season. They are appaling totals that would spell relegation over the course of 38 games. 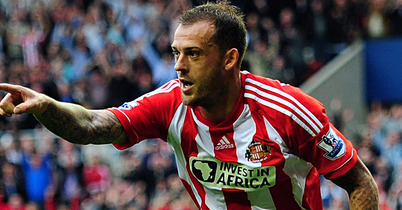 6. Big Win For Liverpool. Liverpool, before the Norwich away fixture, sat in 18th place with 2 points from 5 games. To say that Brendan Rodgers needed a positive result against then 17th placed Norwich was an understatement. Liverpool got that result and in some style, a great hat-trick from Suarez (2nd hat-trick in consecutive games v Norwich in away games) and a generally lively attacking performance saw the Reds romp home in Style. Greater consistency is needed, though.

7. Team Save %. We have talked before of Man City's save % and how it was likely to regress positively toward the mean and so it is. We see City's save % creeping upward ever so slowly despite being in the bottom 8. Here is 2011/12's list of team save %'s.

Chelsea are killing it and Liverpool look very poor so far this term. Save % is a mix of goalkeeping skill and the quality of chances a defence gives away.

8. QPR Preview. Should be a decent Monday night football tonight. West Ham travel across London to face QPR. Rangers currently sit in the relegation zone but in Mark Hughes they have a good PL manager and there squad is a strange mix of very talented players and journeymen. They should have enough quality to beat West Ham tonight and to finish the season in lower mid table.

9. Chelsea. The Blues sit 1st in the PL table with 16 points and deservedly so. I am not Di Matteo's biggest fan but he has managed to blend in the new signings and retain the stalwart pragmatism of the Chelsea of old and it is working. The win away at Arsenal was a fine result in what was Chelsea first real test of the season. Chelsea have had home games versus reading, Newcastle and Stoke and away fixtures against Wigan and QPR and Arsenal. I would expect a decent side to gain nigh on maximum points from these fixtures. Chelsea have done that but far far sterner tests await. 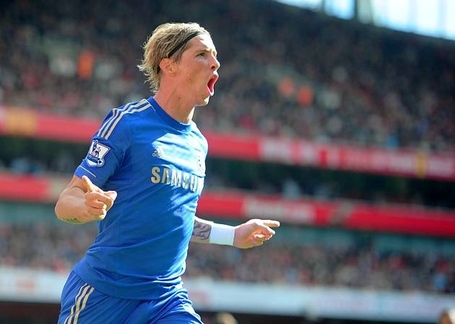 10. West Brom. 5th in the table and the seasons surprise package so far. It's always difficult to gauge how an assistant will cope in the hot seat, but Steve Clark has done mightily well so far. 3 wins, 2 draws and a loss is a fair return for games against Liverpool, Everton, Spurs and Fulham. West Brom have 9 points out of 9 at home and have only let the opposition have 4 shots on target in those 3 home games.

Clarke's defensive coaching seems to be paying off.