A comprehensive victory without ever being an accomplished performance. But with a requirement to get back to winning ways following the defeat at Sunderland it was an impressive response and underlined the resilience and strength that the side has to turn round a performance only forty-eight hours after the trip to North-East and helped quell any murmurings regarding their mental fortitude in being able to respond to setbacks. With the Carling Cup semi-final only a week away it also helped perhaps gain a psychological advantage ahead of the first leg at The Etihad Stadium.

Interestingly, City posted by far their worst numbers of the season in terms of possession (36%), attempts (331), completions (256) and accuracy (77%). Much like the game at Anfield Liverpool were able to control the midfield for large parts of the game and at times City were restricted in terms of territory and unable to build their possession game due to some wasteful play. Was this tiredness and fatigue though or could this have been a tactical approach in part from Roberto Mancini? Whilst James Milner came back into the midfield, David Silva, Yaya Toure, Gareth Barry, Edin Dzeko and Sergio Aguero all played significant minutes at Sunderland and it was asking a lot to expect the high tempo and high line pressure that City usually play. Perhaps City were aided by Liverpool opting not to start Steven Gerrard and Craig Bellamy, which meant that being content to sit deeper (attacking half and final third numbers were also season lows) than usual and allow Liverpool more of the ball would not hurt them if the defence retained their shape, as they managed to do.

How much will City miss Yaya Toure whilst he is on international duty? Fortunately it appears as though he will be available for both the FA Cup tie against United and the first leg of the Carling Cup next week against Liverpool (as will Kolo Toure of course) but his absence will create a huge hole in the midfield which they will be hard pressed to fill (Roberto Mancini described him as 'irreplaceable' post match), although James Milner has shown flashes at times. Possessing drive, energy and power in abundance he has stepped up his game of late (despite being a mainstay in the side) - crucial at a time when Gareth Barry and particularly David Silva are beginning to look tired and suffering dips in form (albeit from the tremendously high standards they have set). Mancini of course can count on a fresh Nigel de Jong and returning Owen Hargreaves in reserve and expect both to feature prominently over the next month or so.

Another plus point today was the defensive unit. Kolo Toure was restored alongside Vincent Kompany (who was deservedly named man of the match) along with Micah Richards and Gael Clichy. With ceding possession and territory to Liverpool, a huge amount of pressure was placed upon the defence but they held firm to post the fourth clean sheet in five games (the one anomaly being the last minute goal conceded at Sunderland). Particular pressure was exerted from out wide by Liverpool, attempting 39 crosses (to City's eight) and both Vincent Kompany and Kolo Toure set season highs of 14 and 11 clearances respectively - evidenced in this article over at EPL Index and this graphic from the Guardian Chalkboards: 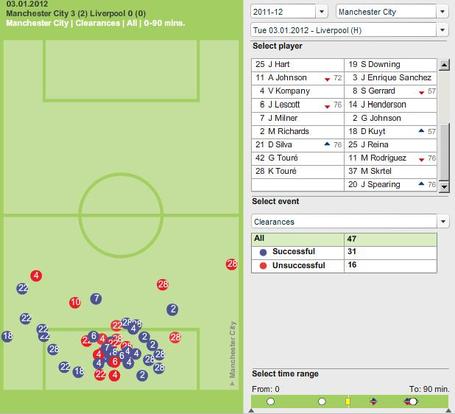 Equally worth a mention was Joe Hart; often a bystander this season with the emphatic attacking displays but he made a crucial save when the game was at 0-0 (moments before City took the lead). I wrote back in September that it could be the defensive unit that could hold the key in the battle between City and United, and City do currently look well placed in that regard.

After a disappointing display at Sunderland, illness and injury elsewhere provided Edin Dzeko another opportunity to shine. It was a hard working display, Dzeko's movement and link up play solid and he clearly thrives in a pairing as opposed to the lone striker role. The difficulty with his play currently is there is a hesitancy and lack of confidence in the final third - something not evident earlier in the season when he was in a purple patch of form. The difficulty faced at the moment is that with Tevez frozen out of the picture City are carrying only three strikers (the definition of 'only' somewhat open to discussion given the quality of the trio) and if one is out of form (as Dzeko is) then Mancini does not have much room for manouevre. Should Mario Balotelli be fit to return on Sunday you would expect to see him get the start, which would mean that Dzeko is on the outside looking in without any obvious games for him on the horizon to be able to play his way back into form.