Are the top four on course for records points totals?

Share All sharing options for: Are the top four on course for records points totals?

With victory against Wigan last Monday, City broke the 50 point barrier for the 2011/12 season and in the process of doing so become just the fifth side (since the move to three points for a win) to reach that mark after 21 games of a season.

In doing so it is perhaps then a surprise that City only currently hold a three point lead over second-placed Manchester United and a five point lead over Tottenham in third place. A closer look at the records of the sides at the top end of the 2011/12 Premier League table though shows quite how good a start has been made as we head to the two-thirds mark of the season.

Looking at data from the past ten Premier League seasons and comparing the average Points Per Game (PPG) of the top four placed sides with the PPG achieved so far by this seasons top four - City, United, Tottenham and Chelsea - through twenty-one games shows that there have been only two occasions - Chelsea's 95 point mark in winning the title in 2004/05 and Liverpool's 76 point fourth-placed finish in 2007/08 - that have bettered the mark achieved by the current top four: 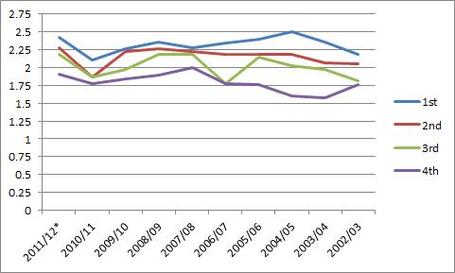 City's PPG of 2.42 is certainly impressive, but they have been unable to shake off both United and Tottenham, who sit on a PGG of 2.28 and 2.19 respectively, which, if that pace is continued would be the best figure posted over the past decade at least.

When both City and United were sat on 45 points at the halfway point (19 games) of the season, I wrote that if either side replicated that performance over the second half of the season then it would be a big surprise if that did not make them Champions.

This would see a PPG average of 2.37, good enough for fourth best for first-placed sides over the past decade and a figure better than any second-placed side has managed. With a highest point tally of 87 from a runner-up during this time the 90 point target is surely one that Roberto Mancini, Sir Alex Ferguson and Harry Redknapp have likely targeted as the benchmark to achieve.