£ = Performance? A Statistical Look At Manchester City’s Offensive and Defensive Production Since 2005/06

Share All sharing options for: £ = Performance? A Statistical Look At Manchester City’s Offensive and Defensive Production Since 2005/06

It is difficult to know how much success a club's spending on squad and coaching can guarantee, but that has seldom prevented owners and managers from trying. And occasionally analysts have done a terrific job getting good statistical results correlating transfer fees or wages with club's league points, for example - witness Tomkins et al.'s terrific work in Pay To Play.

City is one of those clubs for whom spending sizable amounts of money is a relatively new thing, and it finds itself in the midst of a big experiment, having gone from achieving promotion to the Premiership less than ten years ago to becoming the richest club in the world and consistently contending for trophies. The past five years, in particular, have seen a profound transformation of the club's fortunes, so we thought it would be interesting to take a look how things have evolved on the pitch beyond points but with the help of things we can actually measure.

Perhaps the most straightforward way to divide the past 5+ years is by splitting them into a "before" and "after" period and to take a look at the club's performance before and after Mark Hughes was installed as manager. This also roughly coincides with current ownership of the club.

City fans will remember that Mark Hughes's first season in 2008/09 met with mixed success. He was trying to quickly rid the squad of some of the characteristics and traits allowed to develop under Sven-Goran Eriksson, while at the same time attempting to impose his own methodology and style of work. As a consequence, a number of players were shipped out, and players such as Vincent Kompany, Shay Given, Craig Bellamy and Nigel de Jong were all added to the squad in relatively quick succession.

As a result, fortunes were mixed, at least initially. There were disappointing domestic Cup defeats and inconsistent form in the Premier League, yet the year also saw an impressive UEFA Cup run to the quarter-finals. The summer then brought the first summer transfer window under the auspices of the new ownership.

Whilst Hughes brought in players across all positions, it was on defence and attack where he spent big. In defence, Hughes's judgement was that Richard Dunne's best days were behind him, leading him to add Kolo Toure and (eventually) Joleon Lescott. In attack, he went even further. Realising that the attack the previous season had featured the likes of Benjani and a very raw Ched Evans, Daniel Sturridge, and Felipe Caicedo, Hughes spent big. Firstly, he made bids for Carlos Tevez, then Roque Santa Cruz and finally Emmanuel Adebayor to totally overhaul the forward line.

So what do the data tell us about the impact these changes had? Since that point, and coinciding with the spending during that period, City's fortunes have improved measurably and the club quickly moved ahead of the league average both offensively and defensively.

Here are some numbers on offensive production. The graphs below reveal that, in 2009/10 (where the season was of course split between Hughes and Roberto Mancini), the Goals Per Game (GPG) average (aided by the wonderful debut season from Carlos Tevez) was way above the league as a whole: 1.92 compared with 1.38, with key areas such as Goal to Shot Ratio (GSR) at 0.15 compared to 0.11 and Shot Conversion (SC) 0.28 to the league average 0.21. Little wonder this helped the side climb the table from the previous season. 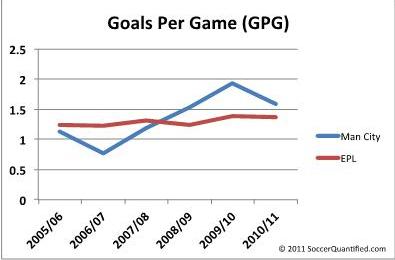 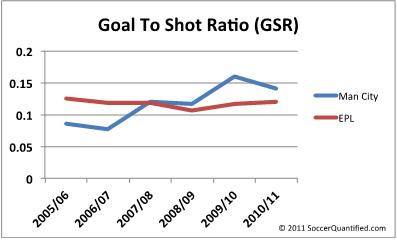 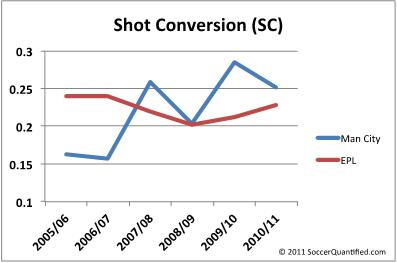 This doesn't mean that City outplay the league on every offensive metric. For example, on the number of total shots or shots on target (accuracy), the team's performance has been right around the league average, as the next graph shows. 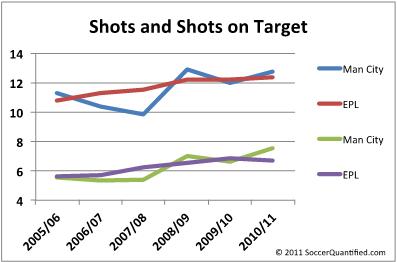 But we take the glass to be half full. As history and data show, putting the ball in the net clearly was not an issue. Instead, it was the goals against that continued to be a problem and was a pivotal reason for his eventual dismissal and subsequent appointment of Mancini.

Much like the data from an offensive standpoint, the defensive data are more than comparable to that of the league as a whole. The Goals Against Average (GAA) was lower than the league's (1.18 compared to 1.38). But not only that, City were superior on other dimensions of defensive production; for example, in terms of Shots Against (SA), Shots on Target Against (SOTA) and Clean Sheet Frequency (CSF), they did considerably better than the league average, as the graphs show. 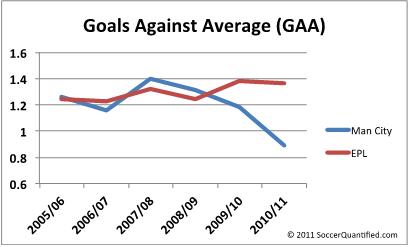 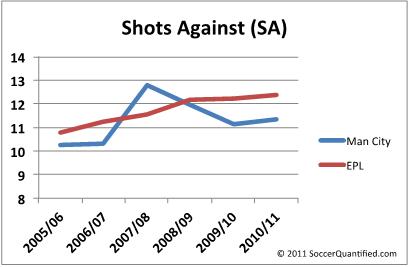 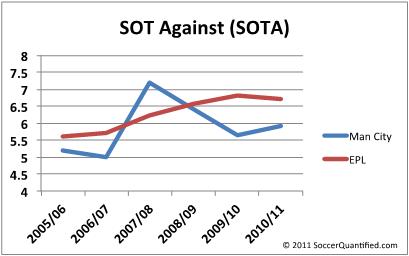 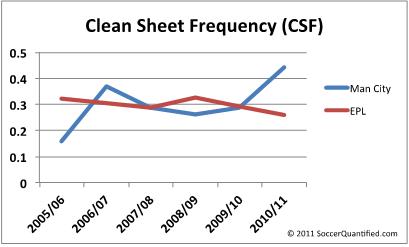 When we put offense and defence together, we can see the following. Compared to last season, it is clear that Mancini sacrificed some offensive production, but also managed to tighten up from a defensive standpoint. The defensive data shown that City have been impressive defensively and more successful than a full season under Hughes's' stewardship had been.

In fact, moving into 2010/11, Mancini has taken things even further. Much has been (incorrectly) written about the defensive approach adopted in games this season, but for those who was have watched City on a regular basis will know that Mancini likes to deploy certain systems whose key traits are retention of possession and crowding opposition space. Clearly, the side has bought into this ethos, with the results clear to see.

As the data show, the GAA in 2010/11 now stands at an impressive 0.88 compared to the league-wide average of 1.36. Moreover, with Joe Hart closing in a club record for clean sheets in a season, the clean-sheet frequency of 0.44 is way ahead of the overall league average of 0.25. City also fare better in key areas such as SA, SOTA and Conversion Against (CA), proving that the side is in far better shape defensively: a trend started by Hughes and his purchases, but undoubtedly finished by Mancini and a far better defensive system. 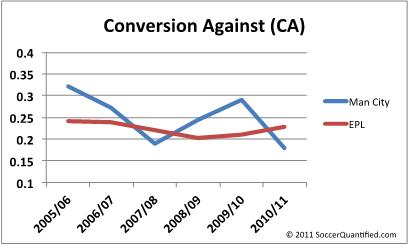 So has this focus on improving the team's defence meant a trade-off with the attack, resulting in poorer offensive production? Not so, as it turns out. As the graphs show, City boast an impressive and above average return in almost every offensive category through 2010/11 so far. Whilst Hughes added volume in attack, Mancini has refined this area, too, bringing in Yaya Toure, Mario Balotelli, and Edin Dzeko, but perhaps most crucially David Silva and finding a more integral role for Adam Johnson. Whilst the side is no doubt tighter defensively, their ability to not only create and fashion chances, but critically, convert them is apparent. So it shouldn't come as a surprise that the side has remained within the top four for the vast majority of the season - and will likely remain there if they can hold their nerve over the final stretch.

So, have City improved? As an illustration of how things have moved on, I'm sure most remember the 2006/07 season - the final season under Stuart Pearce, when there was a real paucity of goals, particularly during the final stretch at home to close out the season.

Although Pearce had brought in Giorgios Samaras for around £6million, there was a stark lack of available resources to him and as a result Pearce largely had to resort to shopping for bargains and free-transfer pick ups. This resulted in a side that - on the back of the Dunne/Richards partnership supported by David James - was durable and tough to beat, but lacked attacking punch. There is perhaps no better way to demonstrate this than to remind readers of the fact that City failed to score in 19 of its 38 games that year and managed only one goal in game a further twelve occasions:

What is interesting though is the lack of attacking threat within the side didn't necessarily result in a lack of creativity. As the graphs above show, too, despite managing only 0.76 GPG (compared to the league average 1.22 - in itself a low figure in comparison to the past couple of seasons), City attempted an average of 10.36 SPG (league average 11.25) and 5.34 SOT (league average 5.72), showing that the side was still able to create chances, but was woefully short in comparison with the rest of the league in their ability to convert.

How times have changed.

So, can money buy performance? Certainly, as we know, expenditures on wages and transfers almost inevitably elevates a club's chances of finishing high in the league table. But what's important to realize is that it can buy different kinds of performance. City are a case in point. While Hughes bought offence, spending under Mancini has been associated with improvements on defence. Are City getting what they've been paying for on offence this year? Perhaps not, with Toure a more consistent offensive weapon this year than Balotelli or Dzeko.   It will certainly be interesting to see how City's transformation evolves over the next few years.

This article was co-authored with Chris Anderson, author of the excellent blog 'Soccer Quantified'.