Share All sharing options for: A look at when City score and concede through the first ten games of 2011/12

We know that City have created a new Premier League record in terms of goals scored (36) through the first ten games of a season so far, but what hasn't generally been focussed upon is exactly when City are scoring.

A look at the numbers does show a definite discrepancy as to when City are hitting the net in the first half in comparison to after the break; just eight goals before the break compared to 28 afterwards, including eight in the final five minutes of games (this in stark contrast to last season when there was a greater return from the first forty-five minutes): 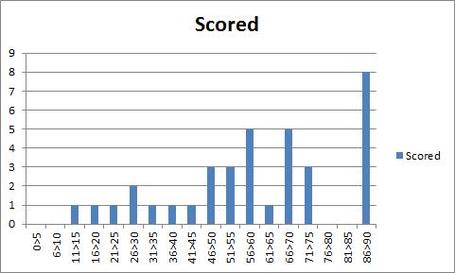 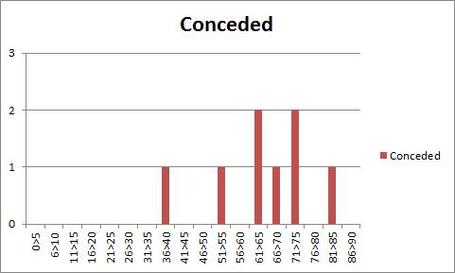 As well as averaging less than a goal a game during the first half of games, City have been ultra-tight in terms of conceding: just one goal (away to Bolton) so far and when City have conceded it has been when they have been well ahead - the second half aberration at Fulham aside.

Looking even closer, it has been the fifteen minute spell between the 61st and 75th minute when they have been most profligate, but, and tellingly, they have yet to trail at any point this season in the Premier League.