It may have taken until the second-half for City to get the go-ahead at Blackburn on Saturday, but once they broke Blackburn's resistance were clinical in putting the game away.

The recap of the game is up here and below are the key numbers from the game:

As shown, City were dominant in pretty much all of the key areas, but as may be the case based on the past two Premier League games sides will look to stifle and frustrate. Particularly evident are the passing numbers that illustrate quite how one-sided it was in terms of the key attacking zones: 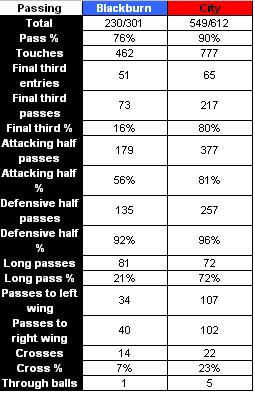 With the quality City has at their disposal, what has been so evident over the early part of the 2011/12 season is their ability to convert this advantage in terms of possession into goals - scoring two or more goals in each fixture so far which has enabled them to post such a return in terms of points to date.