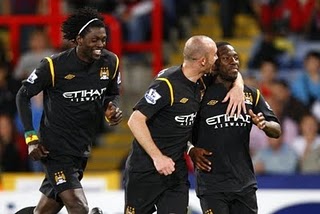 A hard fought and hard earned victory, but impressive in the context of previous failures at this stage of the competition at lower league sides.

For the most part it was a struggle as we contended with a Palace side who impressed. There were pacy, lively and rarely afforded us any time and space on the ball. Particularly impressive was Victor Moses who gave both Richards and Bridge a tough time, but lacked for composure at the vital moment.

It was a surprise team that lined up, with Lescott the only change from the Wolves victory. No significant minutes therefore for the likes of Zabaleta, Onouha, Petrov and de Jong. A good move though in retrospect to get Lescott into the side and allow to integrate in the side ahead of sterner tests.

With Dunne halfway up the M6, the captains armband was handed to Kolo Toure, no stranger to the skippers role, but a surprise to some extent given the expectation that Gareth Barry may be handed the responsibility.

When we did create chances though we looked impressive. Quick and incisive on the break, you can see how the majority of our goals this season are likely to originate from. Still, we couldn't quite break through the Palace defence, with the linesmans flag also thwarting us on more than one occasion.

It was a well taken goal from Shaun Wright-Phillips that helped us on our way, and settled any nerves that may have taken hold the longer the game went on. A nice build-up once again saw Wright-Phillips - who looks to be in good form indeed so far this season - keep his cool to slot home.

Going behind didn't deflate Palace though, and they continued to attack purposefully, and on another day may have got themselves back into the game. Credit must go to the defence and Shay Given though as that is three clean sheets out of three now. The introduction of Lescott did give a better balance to the central area and it was a solid debut by him. You can easily see the attributes that he brings to the side, and why Hughes was so keen to add him.

It was Lescott who had an influence in the goal that sealed the victory. A corner swung in saw Lescott challenge at the near post. Although he didn't connect, Tevez followed behind him to head home for his first goal and seal the victory.