Share All sharing options for: Vassell mobbed in Turkey

This is a great picture just for the sheer bemusement on Vassell's face. 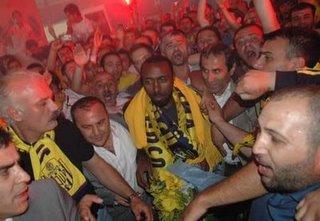 I had imagined that Vassell would likely end up at a top level Championship side (or even one of the promoted clubs) but maybe he fancied the challenge of playing abroad at this stage of his career.

It is easy to dismiss his time at City, but when he arrived at the club he was not far removed from the England set up and had a decent reputation. He did arrive at a time when we were struggling and perhaps was not up to taking on the kind of responsibility demanded of him. It may have also have not helped that he only seemed able to find the net against Aston Villa.

During his latter days at the club he often found himself out on the right, or during the second half of 2008/09 out of the side completely. I'm not sure many of us had heard of Ankaragucu, but it might be one more side to look out for next season.