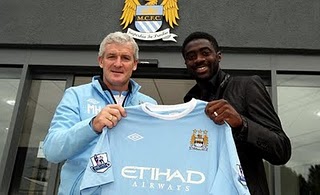 Confirmed by the club earlier today.

Mark Hughes on the signing:

"I am delighted to welcome Kolo to Manchester City. It is no secret that we have been looking to strengthen our defence, and in Kolo I feel we have recruited a world class player. He brings a wealth of Premier League experience from his seven seasons with Arsenal," said City boss Mark Hughes.

"Kolo has been a central figure in a very strong Arsenal team for many years, and I have been an admirer of him for a long time. He is strong, quick, reads the game well and will be an influential figure in the dressing room."

"It is always difficult to leave a place where you have spent the last eight years and had good times but I felt the time was right for a new challenge and I am still at an age where I feel I am at my peak and will play my best football."

"For me it was time to move but only for the right club and I feel that Manchester City is that club. The ambition here is clear to see and is big. Everyone knows this club is moving and that is really, really important".

And so Hughes finally lands the first defender of the summer spending spree as he continues to overhaul the squad from the one he arrived to just over twelve months ago.

Despite some of the protestations from Arsenal fans who have commented on previous Toure posts, I don't think we are landing ourselves a player who is over the hill. And certainly not a mercenary. Far from it.

Toure is still only twenty-eight years of age, with plenty of mileage left. As far as Hughes is concerned, he fits his player prototype perfectly. Strong, athletic and possessing pace, he also has Premiership experience.

Wenger has spoken of having seven centre-halves which is why he could afford to let Toure depart, but Toure is not at the bottom of that pile. Not if that list includes Djourou, Senderos and Silvestre.

That is not to say Toure is John Terry though. Whilst the players we have added follow a pattern, they are what I would describe as 'second tier' players. Good, or very good players, but lacking that real top quality. However, our squad is virtually unrecognisable from when Hughes took over and every position has been strengthened (both from a talent and importantly a mental perspective) from what was inherited.

A key point to note though is that Toure undoubtedly strengthens our squad, and he will step straight into the starting line-up. At the same time (and crucially) his arrival does also weaken Arsenal's squad.

With all at the club appearing to be making a concerted push for the top four this is an important point, as of the sides currently with a hold on those positions Arsenal are undoubtedly the most vulnerable.