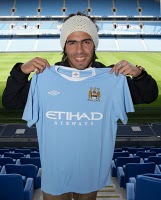 "We are looking to strengthen areas of the team," he confirmed. "Carlos is one of the top strikers in world football and his capture is a fantastic thing for the club and for the fans. He plays with his heart and has great love of football that is there for all to see.

"I want options of flexibility in terms of both personal and tactics. I want players who can produce moments of magic that can turn games. I now have those at the club and we will be working exceptionally hard to give City fans success.">>Mark Hughes.

"City came to me with a very good proposal," Tevez said, speaking via a translator. "They showed me how City has the ambition to become one of the biggest clubs in the world and I was very happy to join.">>Carlos Tevez

"I half-expected Carlos Tevez would be going a long time back," said the United boss. "I think he maybe did a deal around January because I spoke to him and gave him an offer on the night we played Inter Milan and he never came back to me.

"He was a good player and did well for us. But he obviously assessed the situation and wanted to go somewhere else.">>Alex Ferguson

Carlos Tevez was finally unvelied as a City player this afternoon after much speculation over the past few weeks.

Whether Tevez was truly sold on the 'vision' the club has, he felt unloved and underappreciated at Manchester United or whether he was offered all the oil in the Middle East, there is no escaping the fact that we have landed ourselves a very good player.

I know those who write about City are guilty of discussing whether certain players are 'Hughes players', but Tevez fits the profile in terms of commitment, workrate and desire. Tevez has been labelled as a mercenary in some quarters but whether it has been for West Ham or Manchester United, he has been nothing but wholehearted and appears to have a great attitude.

For all that United fans are trying to talk Tevez down (at the same time talking the option of Michael Owen up) he will add genuine quality and industry in attack and I don't see Tevez sitting on the bench too often this season as he will be a key part of the team.

It was confirmed that Tevez will wear the number 32 shirt for us, niftily displaying the new kit which is shortly to be launched. Dubious choice of headwear though.