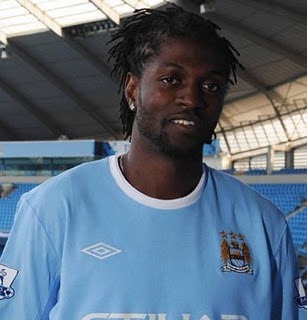 The signing of Emmanuel Adebayor was finally confirmed this afternoon - interestingly the clubs' twitter account leading the way in confirming he was heading to Manchester to sign.

Clearly Arsenal fans are glad to see the back of him, with us seemingly getting our hands on a player who by comparison made Nicolas Anelka a terrace hero. Arsene Wenger believes that it was these same fans who were in part responsible for him leaving:

'We have lost a great player and we wish him well. He's done extremely well for the club. I don't believe that last season he got enough support. That was playing a part in my mind and in his mind, certainly, as well."

Adebayor is not a dud though. His record is impressive and he is the 2008 African player of the year. He has the type of presence in attack Mark Hughes craves, and the attributes we were so lacking during 200/09. We have clearly not picked up the reincarnation of Lee Bradbury here.

I've written plenty before on Adebayor, and whilst it may not have been the most obvious signing, it is a good one. If you ask some basic questions about what he will bring it backs this out; Did we urgently need a striker? No. Will he score goals? Yes. Will he make us a better team? Yes. Does he add something different? Yes.

"Emmanuel has been one of the top forwards in the Premier League since he arrived from France and we are delighted he has agreed to come and join us. Along with the other signings we have made in the last two windows he will greatly enhance our ability to compete with the top sides. His arrival is another clear indication that we are determined to augment the players we have here with the best of international talent."

"He adds vital balance and power to our attack. He has everything a top forward needs. He is versatile, powerful, quick and agile on the ball. I am looking forward to working with him as are the rest of the staff. He will definitely add a new dimension to our play. I have been a great admirer for a long time."

Crucially, if we have designs on the top four then he weakens the side who are realistically the side we can overhaul. Despite the accusations levelled at him, Adebayor will not be easy to replace for Arsenal.

As to where he fits in to the side, it does allow a variety of options for Hughes but I suspect he will look for a three pronged attack with Adebayor in a central role supported by Robinho and Tevez coming inside.

A huge improvement on last season.