Thursday transfer round up - all about Kaka

Share All sharing options for: Thursday transfer round up - all about Kaka

Step by step, it does appear that we are getting closer to actually being able to land Kaka and the media have been all over this story today in a big way.

There were plenty of reports going back and forth (covered here) but what we do know is that Milan have released a statement saying they are 'considering' the offer that has been put to them. There was even a mock up of Kaka in a City shirt on the Mediaset website: 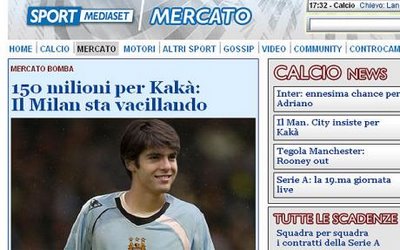 Late this evening it is now being widely reported that Kaka has been given permission to speak to us, with the suggestion being it is more likely than not that he will end at the club:

Kaká has been given permission by AC Milan to talk to Manchester City as the prospect of the Brazil forward arriving at the Barclays Premier League club moved closer to reality last night.

It is still far from being a done deal of course, and it will take one hell of charm offensive to secure the move. Kaka's team mates Clarence Seedorf and Gianluca Zambrotta have urged him to resist any overtures and they no doubt will not be the last to do so.

Press wise, there has not been too much written actually praising our attempt to sign Kaka, but this piece by Martin Samuel sums the situation up perfectly for me:

So, Kaka to Manchester City. What's not to like?But, ye gods, there are some miserable people out there. The death of football, one bloke called it. An impossibly rich man attempts to spend £100million of his personal fortune to bring a truly great footballer into our game in a way that opens up the domestic competition, and this is a bad thing?

Definite reading for the 25% who voted no to the signing of Kaka on the MEN website.

The Guardian are suggesting the total fee could rise as high as €150m (£135m), breaking down as:They have also put together a neat graphic within the piece to illustrate how he would fit into a new 4-1-4-1 formation that Hughes has drawn.

An interesting angle in the Mail, where Ian Ladyman has been dispatched out to Milan to gage the mood, and unsurprisingly it seems the mood is one of fear:

To understand just what selling their Brazilian prince would mean to the Rossoneri you have to do more than listen to Sandra, the charming assistant. 'If Kaka leaves then I will die,' she wails, in classic, over-the-top, Italian style. 'He just cannot leave us. He just cannot.'


Having been to The San Siro on occasion to see Milan, it is evident just how much in the hearts of the fans Kaka is - and the feeling is no doubt reciprocated, so as well as trying to convince him we are a viable option for him, he also faces the prospect of walking away from Milan - a place where is held in the highest esteem.

Gabriele Marcotti has some good analysis in The Times, profiling how he feels Kaka would adapt to the Premier League:

At 6ft 1in and weighing nearly 12½st, he is big and solid, the kind of player who rarely gets outmuscled. He is also extremely durable. He has not suffered a significant injury since he was 16 and has featured in more than 90 per cent of Milan’s Serie A and Champions League matches in his 5½ years at the club. Many of the games he missed were the result of being rested.

Marcotti also feels that with a couple of real quality additions - namely a true goalscorer and dominant defensive midfielder to allow Vincent Kompany to move into defence, we would also not be far short of achieving Kaka's requirement of a top four finish next season.

A busy day all in all, but the tide appears to be in our favour at present. Hurdles have been navigated and soon (perhaps as early as next week) the ball will be very much in Kaka's court for him to decide whether to make the move or not.