Kaka transfer round up

Share All sharing options for: Kaka transfer round up

As we all know, Kaka was in Milan's line up last night for their 1-0 victory over Fiorentina, playing the full game.

At the end of the game, there were embraces for team mates amidst scenes of unrest in the crowd, with the Milan fans venting their anger of Adriano Galliani and Silvio Berlusconi: 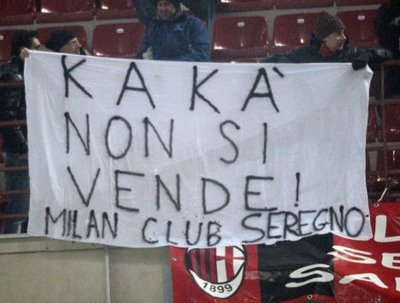 It is hard to read too much into last nights events, as if he was pulled out of the line-up it would have been apparant a deal was almost concluded. His appearance last night - whilst emotional - could not be totally construed as a tearful farewell.

"But it is not a simple transfer. It is not just a case of talking to the club and talking to the boy and getting the deal done within 24-48 hours. The deal, if it is to be concluded, is very complex as there are so many elements to it.

"It is not going to be an easy process and won't be concluded quickly. I am sure we will give it the amount of time it deserves. We find ourselves in a special situation. We are interested in one of the top players in the world."

The Daily Mail suggests Kaka is in 'turmoil' over whether to agree to the move:

Kaka, the 26-year-old, God-fearing superstar at the centre of what would be the biggest football transfer in history, has been reduced to tears as the enormity of the £100million deal that will see him exchange Milan's world-famous San Siro for the rather more prosaic City of Manchester Stadium sinks in.

Whilst it is also suggested that Real Madrid could be set to match any offer, although given their off field instability with Ramon Calderon resigning this week this is highly unlikely.

Perhaps most of interest today is a piece in The Observer:

The adviser to Sheikh Mansour bin Zayed Al Nahyan, City's billionaire owner, told Observer Sport from Abu Dhabi last night that media coverage of City's offer for the Milan player, plus reported £500,000-a-week wages, was wildly unrealistic – giving credence to growing rumours in Italy that the story has been hyped up by Milan owner Silvio Berlusconi, in an attempt to earn good publicity when no move materialises and Kaká stays at the San Siro. First reports of the "£100m" bid appeared on a website owned by Berlusconi.

An interesting suggestion and one which flies in the face of everything that has been reported both here in the UK and Italy this week. I'd be amazed if the whole of the press (and rest of the country) had in fact been hoodwinked.

Far more likely is that Hughes's comments in relation to the complexity of the deal is more accurate, and this is backed up to a degree by comments from Kaka's agent. Diog Kotschco:

"We have to see a good project, a winning project, for any club to be eligible to have a player like Kaká. We have to be convinced that Manchester City can turn themselves – in the short term – into one of the best eight teams in the world."

It doesn't appear likely that any deal will likely be concluded by early part of this week, but expect this story to continue to dominate the headlines.