All eyes on the San Siro

Share All sharing options for: All eyes on the San Siro 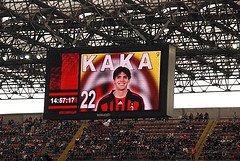 On Saturday night at the San Siro, where he will start for Ancelotti alongside David Beckham against Fiorentina, support for the Rossoneri’s golden child will be tangible and premeditated.

Protests at his proposed sale are planned and some are predicting violence.

It is set to be a lively weekend in Milan where the Rossoneri faithful will no doubt be out to try and convince Kaka his future lies at the San Siro.

There was some thought that Kaka may not be in the line up for tomorrow's game when Milan host Fiorentina in a crucial clash in Serie A, but all indications are that he will start as negotiations are not as advanced as some in the press are leading us to believe.

Kaka's depth of feeling for Milan should not be underestimated as we all consider whether he is likely to indicate he will join us or not, but the piece in The Mail does suggest that he is said to be deeply disappointed that the club have signalled their intent to accept the bid and 'push him into a corner' as he contemplates his future.

I guess we'll just have to sit tight.