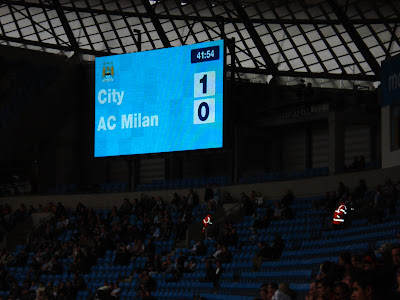 The first piece of silverware of the season stated the PR announcer as we headed out the ground yesterday. Optimistic perhaps, but this is the time of year where that is one thing that all clubs do possess.

It is always difficult to take much from pre-season games, but yesterday was a nice performance to round off the pre-season campaign.

Milan it has to be said were clearly a couple of weeks behind ourselves in terms of progression but had enough quality throughout a reasonably full-strength side to prove to be a good test for us.

I thought we were sharper, looked livelier and more incisive going forward, but Milan's quality in possession and ball retention was evident to see.

Tal Ben Haim started the game partnering Richards in defence, perhaps with one eye on Richard Dunne's suspension for the opening couple of games and he looks a good player for me. He possesses good size, is comfortable on the ball and looks to the read the game well. If Corluka does (at it looks likely) move on, I see Richards moving to the right with Ben Haim partnering Dunne to give us a potentially better partnership.

Elano once again started on the right and had plenty of time and space, and was impressive in his distribution but I can't help thinking that Hughes (like Eriksson) does not quite know what to do with him and I feel that on the right, we miss out on his playmaking ability, but moving him centrally would mean operating with a 4-5-1, which of course causes problems in itself.

With the UEFA games, we have had a decent pre-season campaign and the progression we have had is evident to see, building up well as we now head towards the Premier League opener next weekend in good shape.

A pity then that most of the attention and focus unfortunately seems to be on the off field issues that are swirling around.